In order to support both Copernicus operational services and scientific applications, a SLSTR L2 algorithm is dedicated to the fire detection and the computation of fire radiative power. The fire product is labelled as a land product of SLSTR. However, its coverage is global and this product is also detecting and monitoring oceanic gas flares.

Rises in carbon emissions from fires are substantial, for example 2.0-3.2 Pg C year-1 in 1997-2004 compared to ~7.2 Pg C year-1 in 2000-2005 from fossil fuel combustion. On average, it is estimated that approximately 30% of global total CO emissions, 10% of methane emissions, 38% of tropospheric ozone and over 86% of black carbon are produced by fires. Changes of weather and climate (inter-annual climate variability and long-term climate change) have an effect on a vegetation fire's frequency, size, intensity and severity. Noticed variations in inter-annual atmospheric greenhouse gas growth rates are likely linked to year-to-year variations in global fire activity (for instance, the two thirds increase of CO2 observed between 1997 and 2001).

A potential response to climate changes seems to be the increasing extent of biomass burning activity in certain parts of the world. The unpredictable nature of fire and this inter-annual variability makes SLSTR data important for research, through detecting and quantifying actively burning fires through their emitted radiation signals. 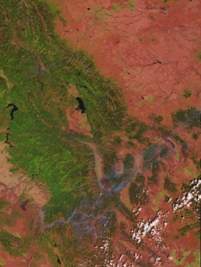 RGB image of forest fires. The image was obtained from ATSR-2's nadir view, during a day-time pass of the northwest American states of Idaho and Montana.
In this representation there is a clear distinction between the cloud (white) and the smoke from the fires (blue), whilst forested areas appear green.