The main applications related to oceanography are: 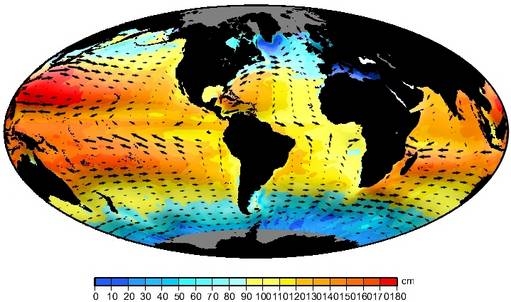 The Ierapetra gyre is a Mediterranean oceanic feature that occurs regularly. This anticyclonic, warm, gyre (turning clockwise, since it is in the Northern hemisphere) forms as a result of northerly wind interactions with the relief on Crete and of ocean circulation in the Kasos strait. The mountains cause the wind to change course, generating swirling movements, which the wind transfers to the sea to form what is known as the Ierapetra gyre.

The strength of this gyre depends on the speed and direction of the winds, with the gyre sometimes visible and sometimes not. Variations from year to year are thought to be due to the winds and the mid-Mediterranean jet along the coast of North Africa. In September-December 2010 (see animation), it clearly appears in the sea surface temperature data. It is also tracked by an Argo float trajectory (platform 6900679) that matches the contours of the highest temperatures in the centre of the gyre. (Credit: MyOcean) 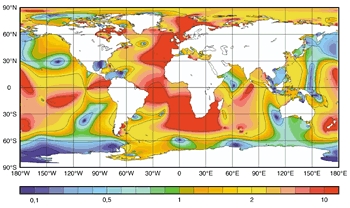 Figure 2: Comparison of semi-diurnal and diurnal tides in the world. The blue/violet areas correspond to dominant, diurnal tides, while the yellow/red areas are semi-diurnal. (Credit: CLS/Legos)

For further information about ocean applications related to altimetry, visit the AVISO website.