The main application of SENTINEL-3 in relation to climate is in determining mean sea level rise due to global warming. As the ocean warms in response to global warming, sea waters expand and, as a result, sea level rises. When mountain glaciers melt in response to increasing air temperature, sea level rises because more freshwater glacial run-off discharges into the oceans. Similarly, ice mass loss from the ice sheets causes sea level to rise. The increased amount of freshwater flowing into the oceans reduces salinity, decreasing density and affecting ocean circulation patterns, which in turn affects sea level spatial variability.

Global mean sea level is an average, over all the oceans, of sea surface height, with respect to a reference. However, what is really sought, is the regional variation in sea level over time. 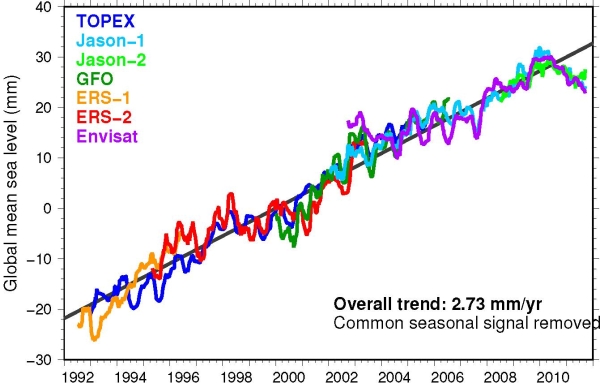 Quicktime animation - El Nino event March 2009 - February 2010. Cyclones have increased in the Pacific, whereas the 2009-2010 Atlantic hurricane season showed a decrease in events. El Nino, the ocean/climate phenomenon, is back. (Credit: MyOcean)