Two radar modes are provided by the SRAL instrument.

In SAR Mode, patterns of 64 coherent Ku-band pulses are emitted in a burst (PRF of 18 kHz) surrounded by two C-band pulses. The burst cycle duration is approximately 12.5 ms so that a four-burst cycle is equal to the LRM cycle of 50 ms. The echo received from each pulse is sampled on 128 complex points. SAR processing on-ground then enhances the azimuth (along-track) resolution of the altimeter for each burst of pulses.

In Low Resolution Mode (LRM), SRAL operates as a conventional pulse-limited altimeter with regular transmitting and receiving sequences, at a Pulse Repetition Frequency (PRF) of 1 920 Hz. Patterns of six Ku-band pulses preceded by one C-band pulse, are used to ensure ionospheric bias correction. The echo received from each pulse is sampled on 128 points corresponding to a 60 m range window. C and Ku-band echoes are accumulated separately over a 50 ms cycle of the radar cycle (i.e. 84 Ku-band pulses and 14 C-band pulses accumulated over that cycle). Further ground processing produces 20 Hz Ku-band and C-band waveforms and the associated parameters for user applications.

The main difference between LRM and Nadir SAR mode, is that the Ku-band pulses within a burst are correlated, due to the selection of a high PRF and the phase coherence from pulses.

SENTINEL-3 is the first Earth Observation altimetry mission to provide 100% SAR altimetry coverage where LRM is maintained as a back-up operating mode. 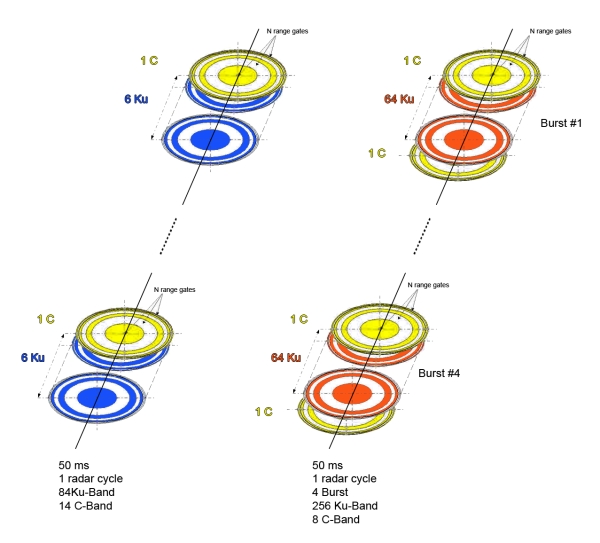