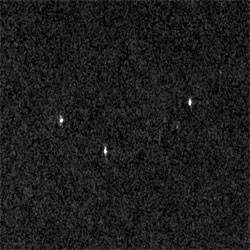 On 8 November 2020, the 9th edition of the world's unique sailing race—the Vendée Globe—set off from Les Sables-d'Olonne in western France, with a route of some 25,000 nautical miles (approximately 46,000 km) going through the Atlantic and into the heart of the Southern Ocean. Data from the Copernicus Sentinel-1 satellite have been used to identify risky iceberg areas, providing the safest route for the skippers.

During this incredible solo race, the 33 fearless sailors have to deal with all sorts of difficulties, besides loneliness – from the risk of icebergs, to the danger of unidentified floating objects, fierce winds, huge waves and swells.

To ensure the safety at sea of sailors and their boats, CLS – a subsidiary of the French CNES space agency and CNP – uses information from satellites to detect and monitor icebergs. This information comes from satellites carrying altimeters, as well as those carrying synthetic aperture radar (SAR) —such as Sentinel-1 of the European Union’s Copernicus Programme.

Satellites are the only way of detecting and monitoring icebergs effectively in the remote Southern Oceans.

While spaceborne altimeters measure differences in the height of the sea surface, therefore also the height of any floating ice, spaceborne SAR returns images of Earth’s land and sea surface regardless of whether it is day or night, and through cloud and rain.

In close collaboration with the race management team, CLS has established an Antarctic ice exclusion zone to keep the Vendée Globe sailors out of the way of dangerous bergs, benefitting from the complementary radar and altimetry data.

During the race, CLS is updating this exclusion zone as necessary, which is provided to the race organisers who communicate it to the skippers.

As shown in the illustrations, CLS created a total of six exclusion zones with a version 0 established before the start of the race in September 2020, through to version 5 provided at the end of December 2020. 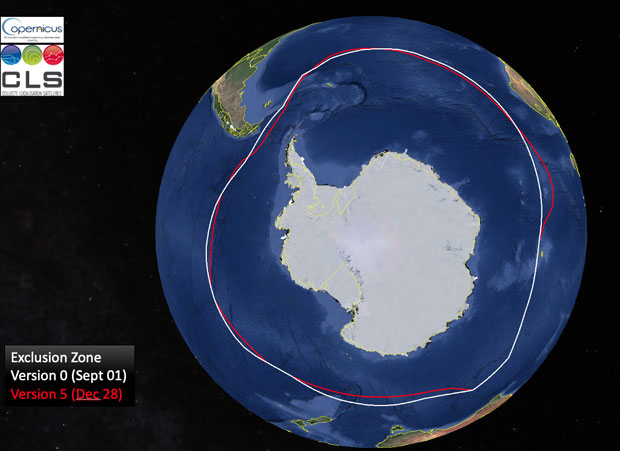 Version 0 was defined mainly with data from altimetry missions (Jason-3, SARAL/AltiKa and Copernicus Sentinel-3A&B), acquired and processed over two months, allowing to identify the main clusters of icebergs, as well as detecting some isolated ones.

In complement to altimetry data, multispectral imagery from MODIS and Copernicus Sentinel-3/OLCI, in clear sky conditions only, allowed to more precisely define the shapes of the clusters detected with altimeters, and to identify other isolated icebergs.

Both altimetry and multispectral imagery from the Sentinel missions are ingested by the Copernicus Marine Service and made available as exploitable near-real time products, which can be useful for applications such as iceberg monitoring.

Version 1 of the exclusion zone was established a few days before the start of the race, using in addition a first set of radar imagery from RADARSAT-2, over some critical areas.

Radar imagery is by far the most efficient observation technique for the detection of icebergs. A full Copernicus Sentinel-1 coverage of the area around the limit of the Antarctic exclusion zone was defined between CLS and ESA, and agreed with the European Commission.

This large-scale coverage was implemented using the Extra Wide Swath mode employing both Copernicus Sentinel-1A and Sentinel-1B, between 11 November and 23 December 2020, ensuring that the radar observations took place a few days before the passage of the leading boat. With radar imagery from Sentinel-1 and RADARSAT-2 satellites, the CLS experts could then consolidate and readjust the exclusion zone several times during the race.

Once a new exclusion zone is defined, CLS then provides it to the race managers who communicate with the skippers. The sailors retrieve all the updated information and integrate it in their navigation tools; they are requested to acknowledge the reception of these new data.

The exclusion zone is defined by a polygon circling around Antarctica and constitutes 72 waypoints (1 point every 5° in Longitude). A new version of the exclusion zone must be provided to the sailors with changes on these waypoints within at least 30 degrees distance from where the lead skipper is — which means about 3 days before they reach that area.

60 waypoints among the total of 72 were located more South than for the previous edition of the Vendée Globe four years ago, and only seven were placed this time more North, reflecting the fact that, this year, fewer large icebergs came to seed the Roaring Forties and Howling Fifties latitude bands with their residuals.

Other Copernicus Sentinel-1 data were also used by the experts, such as the regular observations performed in the Interferometric Wide Swath mode around the Crozet Islands (supporting maritime surveillance and illegal fisheries activities), as well as the acquisitions made in the Sentinel-1 Wave mode, systematically operated over open oceans whenever the other SAR modes are not used. The Wave mode provides sampling observations in acquiring 20 km x 20 km imagettes acquired every 100 km. 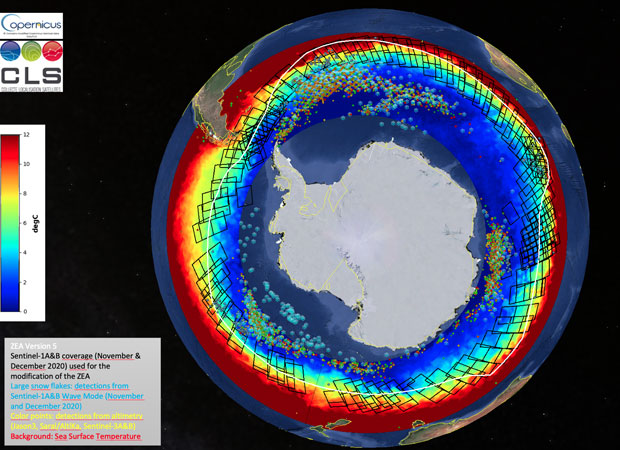 All the icebergs detected in the vicinity of the exclusion zone, were ingested in a drift model that integrates current information coming from the Copernicus Marine Environment Monitoring Service (CMEMS), in order to anticipate their displacement over a few days.

Two main areas were subject to an update of the exclusion zone, an area south-east of the Cape of Good Hope (longitude range 35°E – 65°E), and an area North of Ross Sea (longitude range 145°W – 125°W). For the latter area, as shown on the map, some icebergs were identified outside the exclusion zone during the race, and relevant skippers still in the area were informed to ensure they avoided the risky zone. 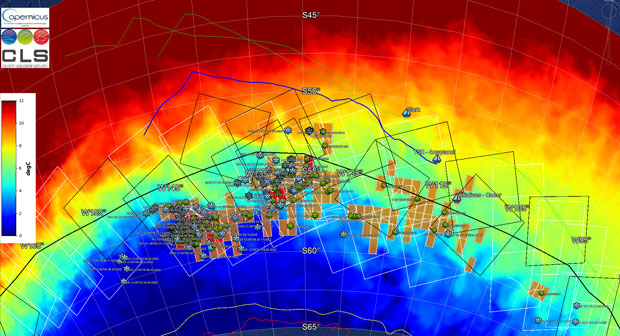 Franck Mercier, head of the Vendee Globe Project at CLS, states, "The observation and detection of icebergs in the southern seas since 2008 has taught us a lot about the seasonal mechanisms of occurrence and drift of icebergs. This allows us today to have an up-to-date synoptic view of the maritime situation during the austral summer period, by combining several sources of information while optimising the use of the observation capacity of Copernicus Sentinel-1."

Pierre Potin, Sentinel-1 Mission Manager at ESA, affirms, "Like for the Vendée Globe 2016, the large-scale radar observations that were specifically planned with the two Copernicus Sentinel-1 satellites for this Vendée Globe 2020 have proven to be very useful to the iceberg detection experts, and in turn for the safety of these exceptional sailors.

CLS is a global company and pioneer provider of monitoring and surveillance solutions for Earth, created in 1986. They are a subsidiary of the French Space Agency (CNES) and CNP, an investment firm. Their mission is to create innovative space-based solutions to understand and protect our planet and to manage its resources sustainably. CLS employs 800 people at their headquarters in Toulouse (France) and in 30 other sites around the world. The company works in five strategic markets: sustainable fisheries management, environmental monitoring, maritime surveillance, fleet management, and energy & mining. CLS processes data from 100,000 transponders per month (such as drifting buoys, animal tags, VMS transponders, & LRIT tracking) and observes the oceans and inland waters (more than 20 instruments onboard satellites daily deliver information to CLS on the world's seas and oceans).

In addition, they monitor land and sea activities by satellite (nearly 10,000 radar images and several hundred drone flights are processed each year). The CLS Group had revenue of nearly 140 million Euros in 2020. Committed to a sustainable planet, the company works every day for Earth, from Space. www.cls.fr