ESA is pleased to announce that, in addition to the Copernicus DEM 90 metre resolution released in 2019, the access rights for data at 30 metre resolution have now been extended and the dataset is openly and freely available to any registered user.

Since 2019, the Copernicus Programme has been equipped with a global and consistent high-resolution DEM, available to all its users to address a variety of applications.

There are two types of DEM: digital surface model (DSM) and digital terrain model (DTM). DSM represent the envelope of Earth's surface including vegetation and human-made objects, such as buildings and other types of infrastructure, while DTM represent the ground elevation. DSM are useful for landscape modelling, city modelling and visualisation applications, while DTM are often required for flood or drainage modelling, land-use studies, geological and other applications.

The Copernicus DEM incorporates flattened water bodies and the consistent flow of rivers and the editing of shore- and coastlines, implausible terrain structures and special features such as airports. It is based on radar satellite data of unprecedented geographical range, covering the entire global landmass including Antarctica and arctic regions. The base data have been acquired by the TanDEM-X mission, operated by DLR and made available as WorldDEMTM by Airbus. 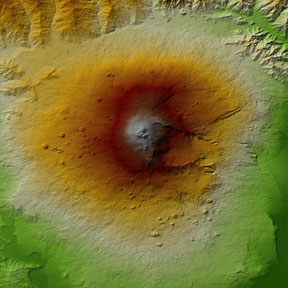 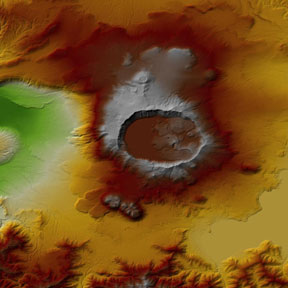 The Copernicus DEM is provided in three different instances named EEA-10, GLO-30 and GLO-90 and is a global model available in 30 metre and 90 metre resolution globally, as well as in 10 metre for the EEA39 area.

While GLO-30 provides worldwide coverage, a small subset of tiles covering specific countries are not yet released to the public, but only available to users belonging to the previously authorised user categories, as defined in the applicable license. Download the list of countries representing constraints in terms of access rights.

The validation of the vertical accuracy is essential to ensure that the elevation data fulfil the specification. To perform such a validation, a suitable reference data set with a certain accuracy as well as global coverage has to be acquired. The Geoscience Laser Altimeter System (GLAS) of NASA's Ice, Cloud and land Elevation Satellite (ICESat) generated a unique set of data: obtained by means of Light Detection And Ranging (LiDAR) technology, it provides a vertical accuracy good enough to validate the Copernicus DEM.

The availability of the Copernicus DEM 30 metre dataset to all users is a game changer for many applications, considering its global coverage, very good accuracy and now the availability of a free & open licence. Applications benefitting from it include, for instance, the geometric correction of satellite images, the modelling of water flow for hydrology, rendering of 3D visualisations, or precision farming.

The access mechanism is explained in the Data Discovery and Download page. Technical documentation on the different Copernicus DEM products is available in the Product Handbook and the Validation Report.