Researchers of a Swiss company are testing Copernicus Sentinel-1 data to better calibrate the Enhanced SAR Vegetation Index (ESVI) for drought conditions, which could help insurance plans for farmers.

Drought damages are among those risks that create the biggest losses for farmers. Index based insurance plans are normally triggered by a weather station, where each insured farmer, by contract, is assigned to a specific one.

Existing drought index insurance schemes use weather stations with historical data to identify the baseline of what is a drought condition; to calculate the premium in respect to the repetition rate of occurred losses; and to trigger an actual event.

Such schemes can be very useful with weather stations, but the situation between those stations can differ significantly, for the following reasons: the distribution of rainfall varies, the water holding capacity of the soil varies and the ground water table can be on different levels.

The insurance scheme defines the threshold. For example, if there is less than 10 mm rainfall within 6 weeks from mid May to end of June then the farmer is reimbursed.

Therefore, an enhanced approach with a hybrid model could be of interest for all stakeholders. Such a model would use weather stations in the same way as traditional drought index insurance schemes, but could be enhanced with remote sensing data to regionalise the triggered drought condition.

This would benefit the insured farmer with certain advantages, such as regionalised data, which better reflect the situation on the insured farm, ensuring a better risk management against drought.

For crop insurers, the advantages are that the calculation of the premium can be improved because the more accurate localised data better correlates with the real damage incurred by the farmer. The customers similarly benefit from this because it reduces the risks and helps them decide whether they need to invest in insurance. In the event that a weather station fails, the additional reference data provided by localised remote sensing helps identify drought conditions.

Dietrich Heintz, researcher and CEO from the Swiss company Cropix compared the situation around 31 stations in Hungary, with Sentinel-1 data from the European Union's Copernicus programme. He considered the cropland of the ZIP-code area where each weather station is located, in order to calibrate the ESVI for drought conditions.

Radar (SAR) data are recommended for such insurance schemes, since these are independent of daylight or weather conditions.

Copernicus Sentinel-1 data can be downloaded free of charge and are acquired every 6 days in Europe, for both ascending orbit and descending orbit passes. The ground resolution is 20 x 20 metres. Researchers at Cropix have developed a vegetation index (ESVI), which is a proxy for fresh biomass and suitable for a drought index insurance scheme. 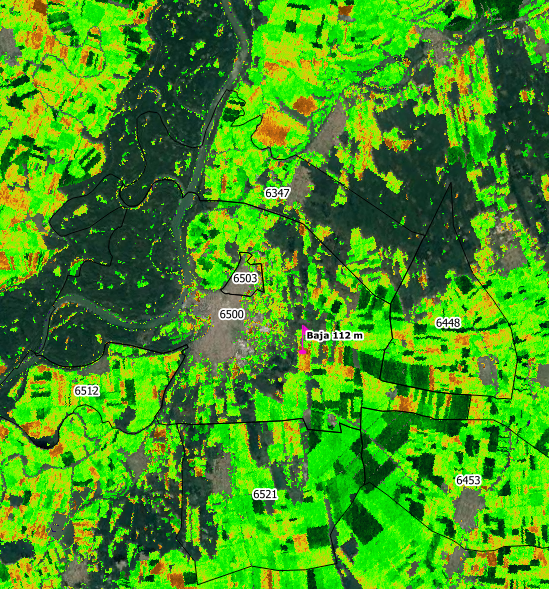 Heintz states, "With remote sensing data such as those from Copernicus Sentinel-1, which can be calibrated around the relevant weather stations for the insurance contract, the situation can now be checked on single pixels, or single plots, or single farms or single ZIP-code areas—useful for farmers wanting the best benefits possible."

If this is the case, the ESVI could be used to describe the situation in the area between those weather stations and would be suitable for regionalisation.

In the Hungary test area, researchers obtained hourly data from 31 stations from part of 2005 and others from 2010 onwards.

The weather data were used to derive a model describing the household water, disregarding the soil condition. The same model as the insurance scheme ran over a period of 48 days.

It started with an amount of water, derived from the amount of precipitation two months before the observation period started.

The parameters for this model are: 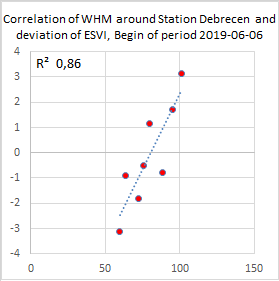 Copernicus Sentinel-1 data are available since autumn 2014 and were used for this study from 1 January 2015 until 31 December 2019. The ESVI values, which are used for observation, are the median values from the cropland of the ZIP-code area, where the relevant weather station is located. 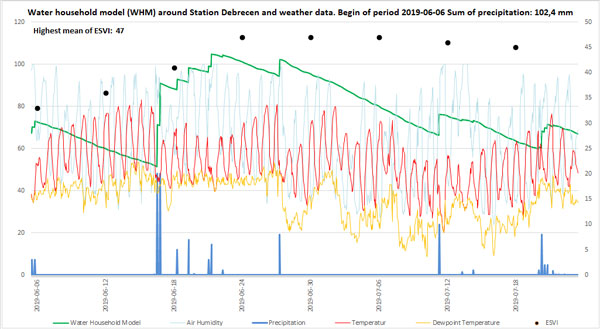 Researchers concluded that fresh biomass on the field is not directly linked to precipitation. The researchers found a shortfall when comparing the ESVI with other years.

A five-year period seemed too short, but according to the timeline of the weather data, they were able to describe the local situation of each single year. With the information from the reference stations, they can calibrate the ESVI to become a proxy for drought.

"With this approach, satellite data should not replace the long-term time-series of weather data, but help to regionalise a traditional drought index insurance scheme over the whole area", added Heintz.

"Such a scheme could help to combine the advantages of traditional and index-based insurance schemes," concluded Dietrich Heintz.