The Copernicus Sentinel-1A and -1B satellites have increased the number and quality of detections of icebergs in the waters around Greenland. 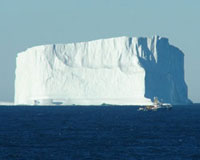 In a lesser-known iceberg collision but similar to the Titanic disaster, the Danish passenger ship M/S Hans Hedtoft sank in Greenland waters in 1959 with 95 people aboard. There were no survivors.

The loss of the Hans Hedtoft directly led to the foundation of the Greenland Ice Service in 1959, with the first ice reconnaissance assistance based in Narsarsuaq southwest Greenland. It is now operated by the Danish Meteorological Institute (DMI). Today, the service is still responsible for monitoring icebergs in Greenland waters, focusing particularly on the danger they pose to navigation and offshore activities.

Iceberg detection does not only make travelling and working in Arctic waters safer, it also enables researchers and other users to see and analyse iceberg data in a climatological context.

With today's issue of climate change and its impact on the mass balance of the polar ice sheets, it has become increasingly important to quantify the amount of icebergs calving into the oceans. 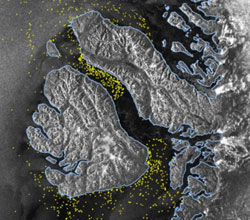 Jørgen Buus-Hinkler, Research Scientist at DMI, says, "With the launch of the Sentinel-1A satellite in April 2014 and Sentinel-1B in April 2016, an unprecedented amount of data suitable for iceberg detection are now available.

"Currently, the observation swaths of the two satellites give us a close-to-full coverage of the Greenland waters in less than four days, using the acquisitions in the radar instrument's extra wide swath mode."

Calving from numerous glaciers along Greenland's coast, icebergs are commonplace in Greenland waters. Calving is one of two basic components that make up glacial loss from the Greenland ice sheet, the other is down to melt-off. The balance between the two is not currently well described; quantification of icebergs will therefore give us a better understanding of the mechanisms that govern the mass balance of the ice sheet.

Most historical data on icebergs come from ship-based observations and aerial surveys. However, since 2010, CMEMS' programmes have provided information on icebergs from satellite-based Synthetic Aperture Radar (SAR) data.

The detection of icebergs is processed by DMI and is based on satellite SAR data from the Copernicus Sentinel-1 mission. In spring 2017, CMEMS will launch a new version (V3) of iceberg products, available through the Copernicus online catalogue. 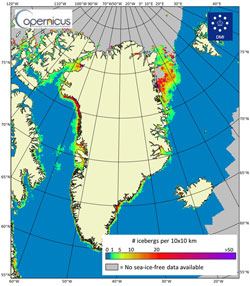 The images from each satellite passing over the Greenland waters are processed with a dedicated iceberg detection algorithm, designed to identify rugged objects on the sea surface. To create the CMEMS iceberg product, which shows the concentration of icebergs per 10 x 10 km, the detected iceberg-targets are registered and counted in 10 x 10 km squares (grid-cells), covering all open-water areas around Greenland. A new feature of the V3 iceberg mosaic-product is the implementation of statistics based on previous years of iceberg observations.

This image visualises the median (normal) number of icebergs within each grid cell. That is to say, for each 10 x 10 km grid cell, a time series of iceberg concentration is generated. Therefore, when looking at all observations registered over time within an individual grid-cell, 50% of the observations will show as many or fewer icebergs as displayed in the chart, whereas the other 50% will show at least as many or more icebergs.

Similar statistics can be derived to visualise both lighter and more extreme iceberg conditions, so that situations can be assessed as normal or extreme. In a warming climate, where an increase in calvings is expected, such statistics will be more and more important - for research and offshore activities alike.