Sea-ice is found in remote polar oceans. It spreads over approximately 25 million square kilometres of the Earth, i.e. two-and-a-half times the extent of Canada. It is a crucial part of the planet, even though it might not directly affect people, since it does have an effect on climate, wildlife and on people who live in the Arctic.

Sea-ice is frozen ocean water. It forms, grows and melts in the ocean. By contrast, icebergs, glaciers, ice sheets and ice shelves all arise from land. Monitoring the temperature of sea-ice is the same as monitoring its appearance, its morphological characteristics and its collapse.

Although sea-ice mainly appears in polar regions, it does have an impact on global climate. The bright surface of sea-ice reflects much of the sunlight that strikes it, back into space. Parts that are covered by sea-ice cannot absorb much solar energy and temperatures in the polar regions stay fairly cool. In the case of gradually warming temperatures, melting sea-ice over time, the bright surface becomes smaller and less sunlight is reflected back into space. As a consequence, more solar energy is absorbed at the surface resulting in further increases in temperature. This sequence of events is temporarily paused when the dark days of the polar winter return, but starts again in the following spring. Polar regions are the most susceptible areas to climate change since even a small change in temperature can result in a greater warming over time.

The movement of ocean waters is also affected by sea-ice. Normal ocean circulation can be altered by a change in the amount of sea-ice, leading to global climate change.

In addition, a proportion of sea-ice is required for wildlife and people who hunt or travel in polar regions. Sea-ice can obstruct or impede normal shipping routes through the northern sea route and Northwest Passage in the Arctic. 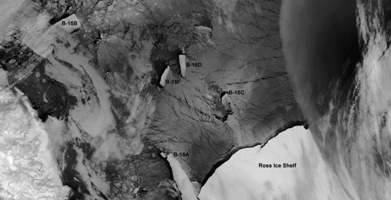