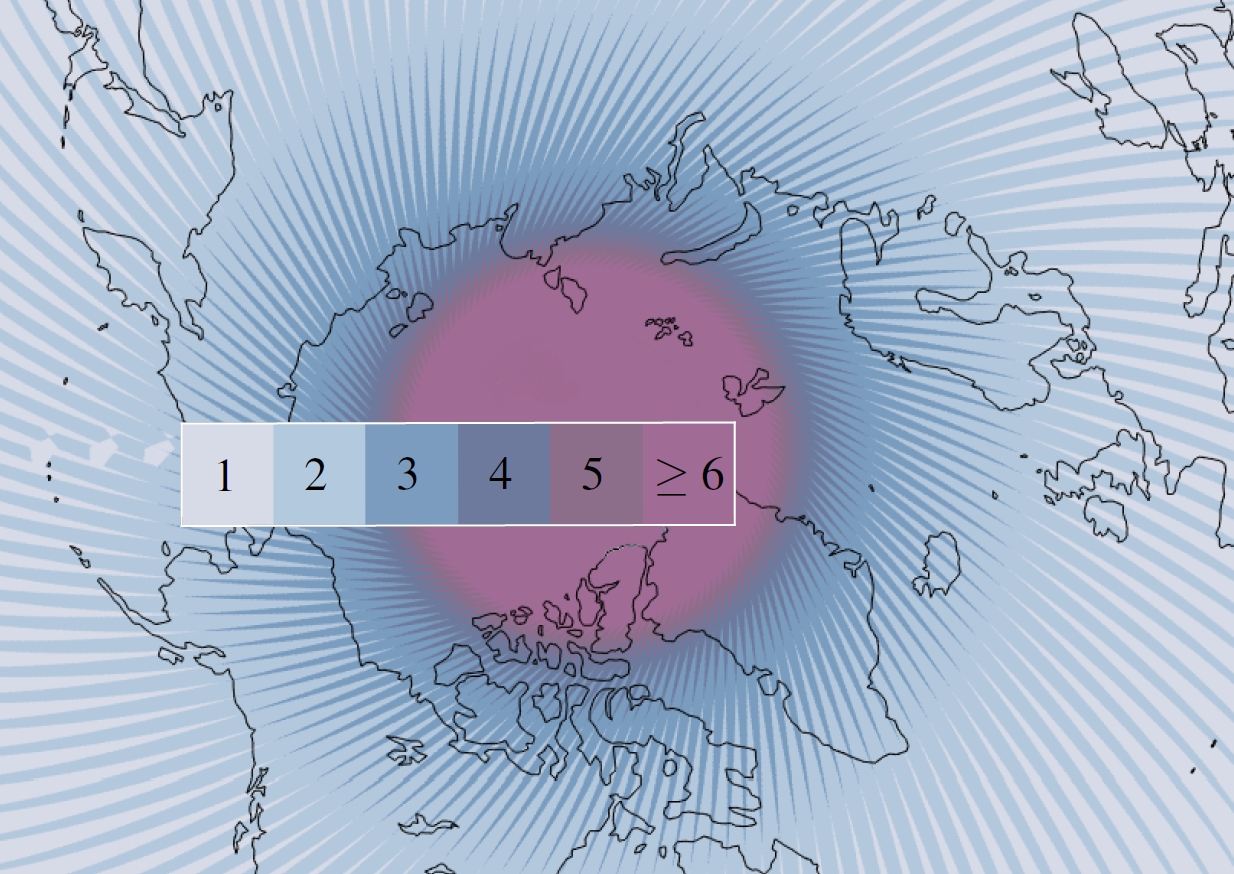 The Copernicus Sentinel-2 and -3 satellites look straight down, and have a large field of view. At the equator, this resolves in a daily or 5-day repeat for Copernicus Sentinel-3 or -2, respectively. However, at high latitudes the coverage is denser (see figure sentinel-coverage-nordic.pdf). The time between repeat images can be in the order of minutes or a couple of hours. These time lags enable detection of short-term surface changes.

Researchers from the Department of Geosciences at the University of Oslo have studied examples of short-term movements occurring due to the atmosphere, short-lived movements happening at the surface, and movements within the ocean. These three examples are illustrated in this article.

The researchers first considered the twins of the Copernicus Sentinel-3 mission. The Sentinel-3A and -3B satellites are equipped with multiple instruments, of which one is the Ocean and Land Colour Instrument (OLCI). This payload is a multispectral camera of 21 bands ranging from the visible to the near-infra-red (400 nm to 1020 nm) and has a spatial resolution of 300 metres. Their field-of-view is 68.5° and thus covers a swath of 1270 kilometres. At the equator, the revisit time is two days, but these twins sense much more frequently in the High Arctic.

In the featured animation two Copernicus Sentinel-3 scenes are shown over the Eastern coast of Greenland. These were taken 40 minutes apart at the end of March 2019. In these images, various types of movement are visible. For instance, in the upper- and lower-left, two different types of clouds are visible. While in the northern part these are closer to Earth's surface, in the South these clouds are higher up in the atmosphere and have thus larger shadows.

Also, in the southern part of this image, the mountain tops are relatively higher and thus shadow movement can be observed, when looking closely. While in the centre of the image the movement of the fjord ice and sea ice is apparent. Large streaks of ice form into a larger patch. The floating ice has an almost smoky appearance, as smaller branches coalesce into a large patch that is full of swirls.

This image sequence clearly gives an idea of where exactly moving and stagnant ice occurs. Furthermore, observing the movement provides a clear overview of where ice gets squashed and packed. This case is found at the Southern flank for most fjords.

The Copernicus Sentinel-2 twins have the Multi Spectral Imager (MSI) onboard. This instrument senses at 13 spectral bands (from 443 nm up to 2190 nm) to Earth's surface, with a spatial resolution of up to 10 metres. The field-of-view of the MSI is 20.6°, equivalent to a swath width of 290 kilometres. Consequently, it takes the Copernicus Sentinel-2 mission 5 days to observe every part of Earth's surface, due to equatorial areas coverage, but less at higher latitudes (e.g. High Artic regions) due to the overlap of adjacent swathes.

An example of what processes and information can be extracted from this within-day imagery is shown in the figure below. Here the Copernicus Sentinel-2 twins overpassed the same area (but along a different orbit) roughly 50 minutes apart. The region is on the upper part of the Kongsvegen glacier, Svalbard, in the middle of the summer.

This is a glacier close to the Ny-Ålesund research station, on the island of Spitsbergen. The snow deposition from last winter is still present on this part of the glacier, but melting is occurring within it, in maximum two- metre deep snowpack. The snowpack on top of Kongsvegen is starting to saturate with melt water. 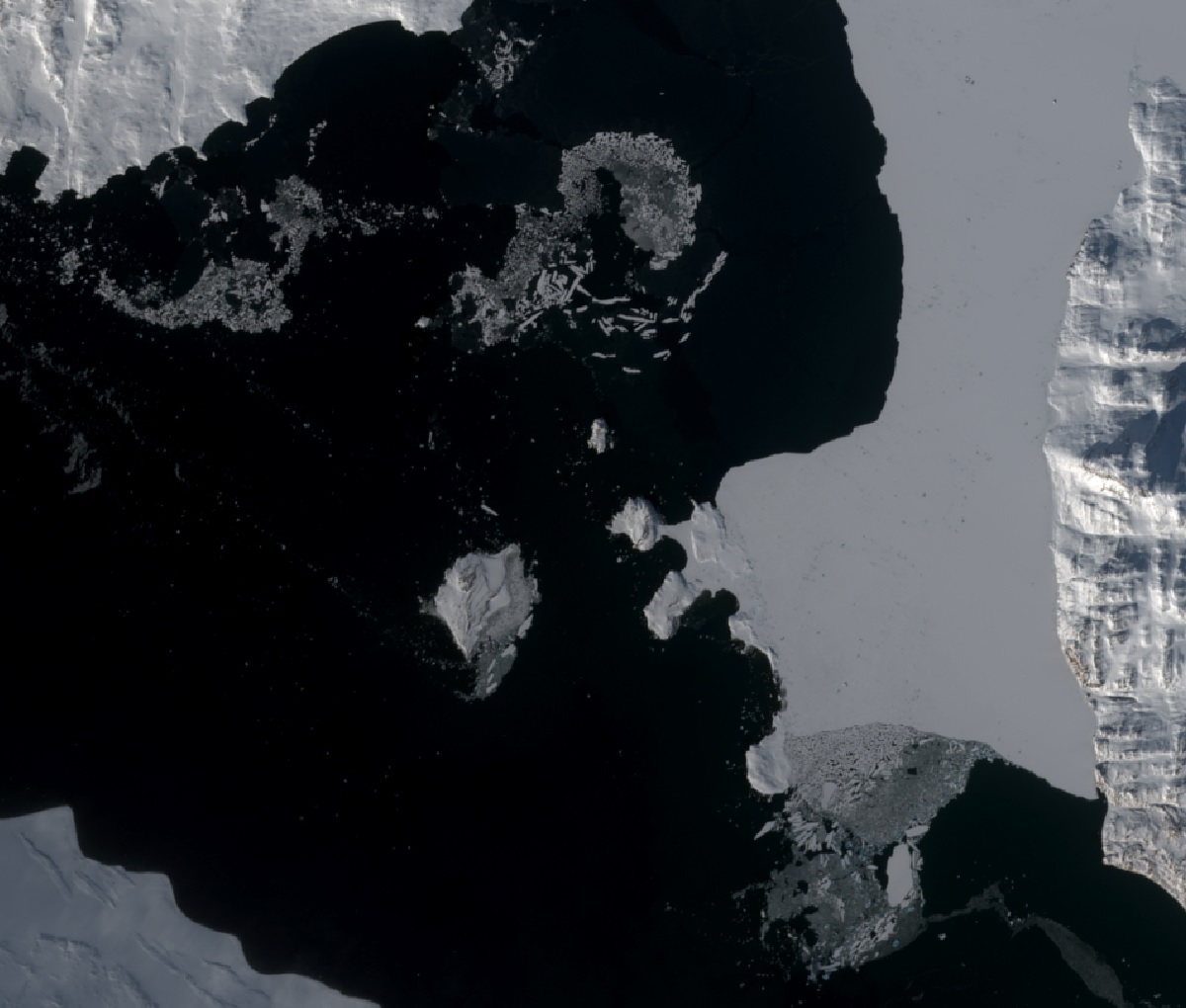 In the image sequence one can clearly differentiate between places where water is accumulating, and places where water is moving. For some locations, the water is only collecting and connectivity is not present yet, while at other places a channel is starting to form. Eventually, this water will flow into a crevasse and find its way underneath the glacier towards the ocean. The information derived from such data enables a further step in mapping of firn-zones, towards delivering hints on water routing and run-off within a snowpack for modelling.

Glaciers are very efficient in eroding mountains. The ice grinds over the bedrock and the melt water transports these minerals away into the fjords. Especially in summer, when an abundance of melt water is coming from the glacier surface, freshwater with loads of sediment is injected into the fjords. Here, the freshwater is mixed with salty water. The circulation in these fjords can be complicated due to differences in slat content and temperature. The mixing of these sedimentary plumes can also be seen by the Copernicus Sentinels. In this way, the motion of sediment plumes can tell us something about the near-surface fjord circulation.

Researcher at the University of Oslo, Bas Altena, comments, "All these examples show new opportunities of information extraction from the Copernicus Sentinel family. This is especially interesting for the Arctic, as at high latitudes there is a rapid transition in spring from cold and dark, to warm and light. Thus, changes also occur rapidly and many of these can now be seen with the Copernicus Sentinel family.

"Although the Copernicus Sentinel satellites were originally not intended to detect short-lived movements, we can now exploit these unexpected opportunities that result at high latitudes from their twin constellations. We can see movement types that we were so far not able to see from satellites, and are only at the beginning in investigating the potential from such observations", concluded Bas Altena.

Therefore, these and other applications are now being explored and developed within the ICEFLOW project - a Living Planet Fellowship initiated by ESA and awarded to Bas Altena. The cases presented here demonstrate the unexpected or unforeseen benefits when dealing with twin satellites.