Launched in late November 2018 by the Geological Survey of Norway (NGU), the Norwegian Water Resources and Energy Directorate (NVE) and the Norwegian Space Centre (NSC), InSAR Norway is a service that aims to monitor and measure ground movements on a national scale, using Copernicus Sentinel-1 data.

The ground beneath us is constantly changing. Seasonal changes in temperature and soil moisture can cause ground expansion and contraction. Buildings, bridges, roads and railways shift and settle due to the soft ground underneath them. Mountainsides can slide slowly and silently downwards for hundreds or thousands of years, before collapsing catastrophically. Like the rising global temperatures, many of these movements are infinitesimal—only millimetres or centimetres each year. Nevertheless, the cumulative effect of these movements can be disastrous.

On 29 November 2018, NGU, NVE and the Norwegian Space Centre launched the operational Norwegian Ground Motion Service with InSAR subsidence data at full resolution, free and open to everyone on the InSAR Norway portal. More than 25,000 users accessed the service in the first week of operation.

The service uses images acquired every six days by the Sentinel-1 satellites of the European Union's Copernicus Programme. Over 4000 images a year, in two different geometries (so-called ascending and descending orbit passes) are used, ensuring that more than two billion locations in Norway can now be measured and continuously monitored to within one millimetre per year. This represents an average of more than 6,000 measurement locations per square kilometre.

The Norwegian research institute, Norut, and the Dutch company PPO.Labs, have been the research and development partners for InSAR Norway, through the KSAT-GMS partnership with the Norwegian Kongsberg Satellite Services (KSAT). The official unveiling was the result of several years of intensive research and development activities, from the design phase of innovative algorithms to implementation and operationalisation of the service.

The main goal of this free service is to produce operational Interferometric Synthetic Aperture Radar (InSAR) ground deformation measurements over Norway and improve accessibility of InSAR results for public and commercial users.

InSAR Norway will provide the basis for strategic governmental use of interferometry in Norway, by mapping ground deformation such as subsidence, assessing rock-slide risks and by monitoring infrastructure in cities. Furthermore, the service will be a tool for creating downstream commercial and public use, for instance in geotechnical, climate, big data analysis, insurance, real estate, structural engineering and transport infrastructure applications. The service will also benefit users such as road authorities, railroad authorities, municipalities and city planners, as well as citizens.

One of the most important uses of the service is to map and periodically monitor rock slide risk. Over 280 lives were lost due to large rock slides in western and northern Norway in the last 200 years, mostly as a result of tsunamis in lakes and fjords. For instance, Lake Lovatnet experienced at least three catastrophic rockslides. 61 people were killed in an event in 1905, while 73 lost their lives in another event in 1936. Luckily, no one was killed in a third event in 1950. 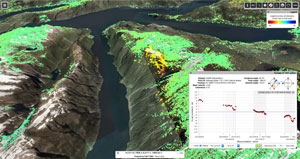 InSAR Norway aims to find all unstable rock slopes in Norway that could collapse catastrophically, to understand the geologic conditions of each unstable slope and rank them based upon their hazard and risk, establishing a 24/7 monitoring early-warning system where necessary.

Many active landslides require only periodic monitoring. For these sites, networks of corner reflectors, which stand above the snow and reflect radar signals, are installed to ensure measurements throughout the winter. Thanks to numerous overlapping sets of Copernicus Sentinel-1 images, these networks can be measured several times per week.

John Dehls, from the Geological Survey of Norway, stated, "Setting-up such an operational ground motion service has had significant technical challenges. However, we are already seeing the first benefits.  New critical areas prone to large landslides were discovered within days of the first dataset being produced. These will be followed up with fieldwork next summer.

"We consider that the information provided by the InSAR Norway service will be of interest not only for public and commercial entities, but also for citizens; we have thus decided to provide the related data at full resolution, freely and openly to everyone. Furthermore, InSAR Norway data will be maintained and updated at regular intervals, thus creating predictability for long-term operational users", concluded Dehls.

McKinsey and Company has stated that over 90% of all big infrastructure projects globally suffer from cost overruns, where 20% are cost overruns for roads, 44% for railroads and 51% for tunnels and bridges. For Norway this would correspond to over 10 billion euros for the 2018-2029 Norwegian National Transport Plan.

According to the Norwegian Geotechnical Institute, these cost overruns are mostly due to lack of knowledge of the subsurface conditions during the planning phase of the projects. InSAR data combined with geotechnical investigations and expertise, will give more accurate information about the ground. This can help reduce risk and cost overruns dramatically. 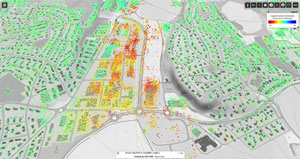 "The concept and design phases of big infrastructure projects in Norway can be improved with information from InSAR Norway, reducing costs and potential damage and having considerable socioeconomic benefits", states Dag Anders Moldestad, from the Norwegian Space Centre.

Einar Østhassel, Head of the Resources and Environment Section, Norwegian Association of Heavy Equipment Contractors, comments, "InSAR Norway will be a useful tool for entrepreneurs and well-drillers working in exposed areas. Knowledge about geology and the influence of the ground water is fundamental in all building matters. Landslides, slip faults, ground conditions and ground water levels cause a large degree of entrepreneur documentation, and InSAR Norway will make this work in a simpler, cheaper and more accurate manner."

"We sincerely believe that InSAR Norway provides a crucial capability that can help improve future strategic decisions for selecting appropriate building methods and location of transport pathways in big infrastructure projects. We are also very much looking forward to future applied use of InSAR Norway, for instance in insurance, real estate, dam monitoring and climate adaption to rising sea level in coastal zones with subsidence", adds Dag Anders Moldestad.

The Copernicus Sentinel-1 satellites and ground motion mapping with InSAR 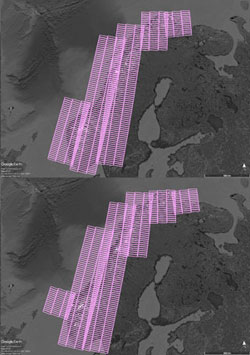 Based on a well-established heritage from the ERS, Envisat and RADARSAT missions, Copernicus Sentinel-1 carries an advanced synthetic aperture radar, working in C-band. The advantage of radar as a remote sensing tool is that it can image Earth's surface through rain and cloud, whether it is day or night. This is particularly useful for monitoring areas prone to long periods of darkness – such as the Arctic and Northern Europe – or providing imagery for emergency response during extreme weather conditions, for instance for flood mapping.

In exploiting the phase of the radar signal, interferometry allows for the monitoring of even slight ground movement – down to a few millimetres – across wide areas. As well as being a valuable resource for urban planners, this kind of information is essential for monitoring shifts from earthquakes, landslides and volcanic uplifts.

Beyond Norway: towards a European ground motion service

"We are very proud of the state-of-the-art tools and methods our team from NGU, NSC, NVE, Norut, PPO.Labs and KSAT-GMS have been able to develop for the InSAR Norway operational ground motion service. Personally, I think this is a breakthrough for applied operational nation-wide large-scale use of InSAR."

A European–wide Copernicus ground motion service based on Sentinel-1 data is under planning by the European Commission in partnership with the European Environment Agency and the states participating in the Copernicus Earth Observation programme.

"This is a very important and valuable development also for Europe, which we look forward to supporting, as well as collaborating with the European Commission and nations in Europe to make it happen successfully", concluded Dag Anders Moldestad and John Dehls.