The SENTINEL-4 instrument monitors the Earth's radiance within the so-called Geographic Coverage Area (GCA), which covers Europe, parts of North Africa, and parts of the Atlantic from 30°N to 65°N in latitude and 30°W to 45°E in longitude.
The area covered by the instrument during full day illumination conditions, thus excluding morning and evening, is called the Reference Area (RA); both are shown in Figure 1, together with the Observation Zenith Angle (OZA) for the instrument.

The instrument has an instantaneous field of regard of 4.0° that covers the north-south range of the Geo-Coverage area (GCA).

Blue and red lines in figure 1 indicate the borders of the GCA, while the green border indicates the size of a 1 hour RA.

For the east-west range a scan mirror is used, that scans continuously from east to west over a range of about +/- 4.5°. After each east-west scan the scan mirror moves back slowly to its eastern starting position in about 20 seconds.

The instrument is operated with fixed scan duration of 60 minutes. During this time, a spatial subset of the GCA referred to as ‘scan window' is covered. In the course of a day, this scan window is shifted in two steps from its easternmost position to its westernmost position, in order to optimise the number of observations with favourable illumination conditions. During a large part of the day the scan window is optimised to coverage of the Reference Area (RA) which is defined by continental Europe. The coverage of the Atlantic in the evening provides valuable observations of long lived constituents that are transported toward continental Europe, and offers clean reference observations for short lived species. 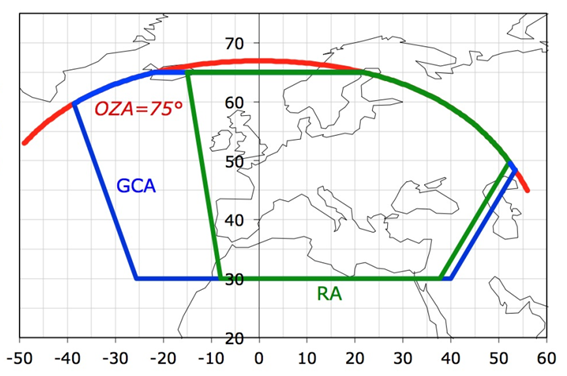