Tracking spatio-temporal variations in flooded areas of wetlands is not an easy task, especially when they are characterised by a dense cover of emergent vegetation. Researchers in France developed a tool to monitor water in seasonal wetlands using Copernicus Sentinel-2 data, which exceed the performance of existing water indices.

The application of remote-sensing techniques for wetland mapping and monitoring is particularly useful because wetlands are dependent on water availability. Wetlands' high biodiversity and economic activities primarily rely on the timing and quantity of water (Lefebvre et al. 2015). Monitoring of flood patterns is therefore essential for understanding wetland evolution and management, leading to development and implementation of several spectral band response methods and indices, to aid water detection in wetlands.

However, one major hindrance to these methods is the difficulty of detecting water under dense emergent vegetation, which obstructs multispectral optical or radar sensors in a variable way, depending on the plant species.

Wetland colonisation by reeds, bulrushes and other helophytes is a primary characteristic of seasonally-flooded Mediterranean wetlands, providing sheltered refuges for wildlife and primary resources for industry and local populations (Poulin, 2001; Rhazi et al. 2012). Hence, failure to detect water presence under vegetation cover could lead to errors in the classification of wetland habitats; the detection of changes in wetland functions; the assessment in water resource use, availability or management; and the extrapolation of wetland biodiversity and services (Lefebvre et al., 2019).

The Camargue region in southern France is a 145,300 ha floodplain that rarely surpasses five metres of elevation. The area is comprised of a network of wetland habitats including ponds, lagoons, open freshwater and reed marshes, salt marshes, salt pans and agricultural land.

Researchers of the Ecosystem Department at Tour du Valat developed a formula that detects Water In Wetlands (WIW), including under vegetation cover, based on threshold values of the shortwave infrared (SWIR2) and near infrared (NIR) bands of Copernicus Sentinel-2.

Data from the Sentinel-2 satellites of the European Union's Copernicus programme were used for model building and accuracy assessment. Reference data consisted of 1229 water-level measures collected in various wetlands of the Camargue, and of 2105 points randomly generated from a water map built using Landsat 8 and SPOT-5 scenes (Davranche et al. 2013), to get information on water presence/absence for all other land-cover types (for instance, forest, fields, buildings, salt flats etc.).

The reflectance values of all these points, which were georeferenced and encoded as flooded (1) or dry (0), were extracted for all Copernicus Sentinel-2 bands. A data-mining approach based on dichotomous partitioning was used to classify water presence/absence based on the spectral value of these bands, as well as of current water indices. The best-performing model was straightforward, using the threshold values of two bands:

In other words, flooded areas could be distinguished from dry areas when pixels had a reflectance value in the NIR band above 0.1804 and in the SWIR 2 band above 0.1131. 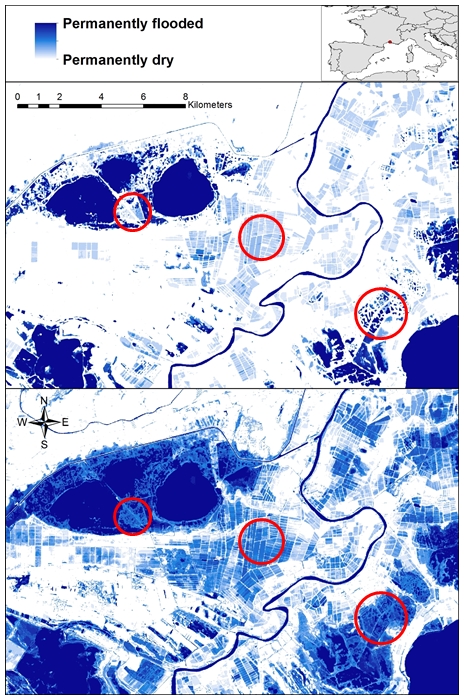 The image (right) shows two water maps of the Camargue extracted from 12 Copernicus Sentinel-2 scenes, obtained monthly from 24 December 2017 through 15 November 2018. The map on top was made with the modified normalised difference water index (MNDWI, Xu 2006) which provides an overall accuracy of 81% with a Kappa coefficient of 0.61, while the one at the bottom is made by applying the new WIW formula (Lefebvre et al. 2019a).

Differences between the two maps are mostly related to wetlands with emergent plants. The MNDWI underestimates flooding duration to different degrees, depending on the density of emergent vegetation. For instance, flooded marsh covered with common reed Phragmites australis were correctly classified at 5% with the MNDWI compared to 71% with the new formula. Both methods however, are performing equally well for identifying areas of open waters.

Dr Brigitte Poulin, Head of the Ecosystem Department at Tour du Valat, states, "With climate change adding an additional pressure on Mediterranean wetlands, having a robust tool to routinely monitor their hydrology, irrespective of vegetation development, will be most useful to practitioners interested in the conservation of these ecosystems. Copernicus Sentinel-2 data are proving to be a game changer in this respect".