For instance, five thousand oil tankers move throughout our oceans and seas daily. Kayrros follows their activity tracking tankers in real-time to obtain a clear and rapid view of oil imports and exports worldwide.

But just how does Kayrros use Copernicus Sentinel-1 data?

Expert scientists at Kayrros created an algorithm that allows the tracking of storage of oil in crude-oil tanks. Such tanks are equipped with a floating roof that moves depending on the amount of oil that is stored under it. Tracking these roofs and their movements makes it possible for the algorithm to predict how much crude-oil is stored where world-wide - thus giving energy market experts vital information to predict market movements.

This algorithm leverages the specific signature of the storage tanks on Sentinel-1 data, and is applied to more than 500 locations internationally - virtually all crude oil storage sites in the world. Every day, Kayrros servers process hundreds of Copernicus Sentinel-1 images, representing more than three terabytes of data. Kayrros' customers in the finance and energy markets are updated in near real-time on important moves that directly affect oil prices, which were previously unmonitorable.

Part of the European Union's fleet of Copernicus missions, Sentinel-1 is a two-satellite constellation that images the entire Earth with a high revisit frequency - important for monitoring rapid change.

First launched on 3 April 2014 and followed by its twin on 25 April 2016, each satellite carries an advanced radar instrument that can image Earth's surface at day or night, regardless of weather. 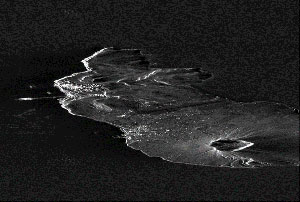 The C-band synthetic aperture radar on Sentinel-1 can provide images in the Interferometric Wide Swath mode (250 km width), with a resolution of up to 3m (Single Look Complex product) within hours from acquisition.

Through the utilisation of Sentinel-1's prolific output, traders and energy companies are better informed since they can monitor their assets in real time, as opposed to traditionally making predictions without seeing the full picture.

Sylvain Calisti, product manager at Kayrros, comments, "Thanks to the Sentinel satellites, we can track crude oil storage more reliably and more accurately to deliver information in a timely manner, which was totally unknown up to now. This is a step change in terms of market transparency for a commodity like oil."