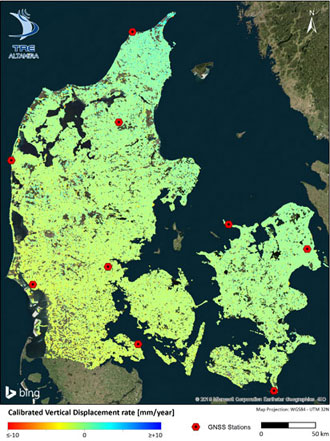 Although most land areas in Denmark are still rising as a result of the post-glacial rebound following the last glacial period, this is not always the case. More than 850 km² land areas are reclaimed low-lying land, most of which is protected by dikes and maintained by pumping and adjusting water levels.

Along the 8,750 km Danish coastline, over 1000 km of dikes play a vital role in relation to coastal dynamics and future climate mitigation. Cities, infrastructure and agriculture located on reclaimed or subsiding ground, often experience a variety of costly challenges.

Free and open Synthetic Aperture Radar (SAR) data from the Sentinel-1 satellites of the European Union’s Copernicus Programme allow for an independent, uniform and systematic processing of ground deformation measurement.

The mission comprises a constellation of two polar-orbiting satellites, operating day and night, performing C-band synthetic aperture radar imaging, enabling them to acquire imagery regardless of the weather. 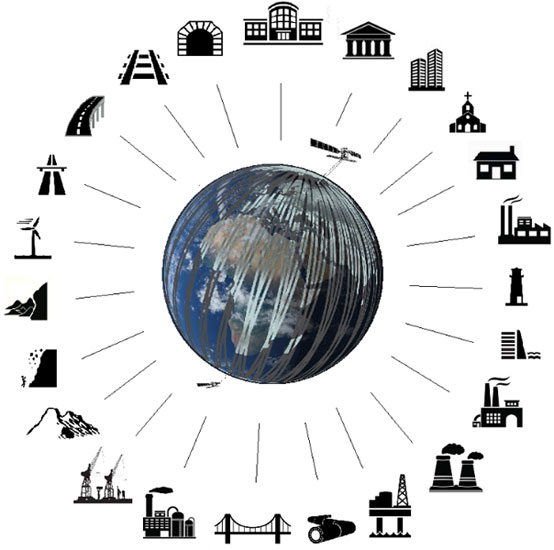 Copernicus Sentinel-1 data enable the estimation of terrain subsidence, or uplift and deformations, of practically anything human-made. This can be done with millimetre precision.

The aim of a monitoring programme is to deliver operational deformations of ground instability and infrastructure in Denmark, while improving accessibility of data and analysis tools for public and commercial users.

An additional goal is to explore and optimise the use of Interferometric SAR (InSAR) data for maintaining the Danish geodetic height network. This includes testing and assessing the value of establishing a nationwide network of compact active SAR transponders (C-band at 5.4GHz) complementary to corner reflectors. The corner reflectors used in support of the nation-wide dataset are able to reflect signals from both ascending and descending Copernicus Sentinel-1 orbits.

From so-called interferograms, elaborated using the phase of the radar signal, interferometry allows for the monitoring of ground deformation with a consistent and high spatio-temporal resolution and coverage. 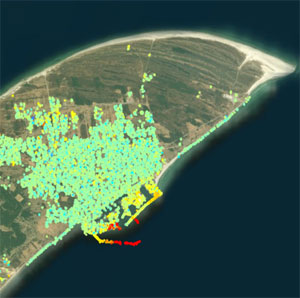 The nationwide dataset is produced by TRE Altamira and provided by the Agency for Data Supply and Efficiency (SDFE), after processing the entire Copernicus Sentinel-1 archive over Denmark, from both ascending and descending orbits.

The deformation estimates have been calibrated with GNSS data and a nationwide uplift model in order to open for more uses. The measurement points are displayed in an online web interface that includes tools for data analysis and download.

The millions of measurement points over Denmark present fundamental potential for geologists, urban and rural planners, road and railway authorities, and in relation to the design phases of infrastructure, climate mitigation, pipeline and wastepipe management, underground gas storage, harbours, bridges and highway extensions.

SDFE plan to maintain and update the data sets at regular intervals, thus creating predictability for long-term users. The first nationwide deformation map of Denmark was produced using Copernicus Sentinel-1 data in 2018, in order to support a wide variety of different uses. The map was updated in 2019 and again in 2020.

“For the Realm of Denmark, Sentinel-1 is a particularly important sensor, supporting numerous applications and uses in Denmark and Greenland. In a recent national overview of uses of Copernicus, more than 30 different uses of Sentinel-1 were showcased. All agencies and institutes under the Danish Ministry of Climate, Energy and Utilities now benefit from Copernicus Sentinel-1 in one way or another, underlining the vast user uptake this satellite has,” states Martin Nissen, Advisor of the Agency for Data Supply and Efficiency.

“Regarding the nation-wide InSAR data, it has been an eyeopener just how many uses in relation to infrastructure and ground motion there are—even in a country with somewhat limited topography and geohazards,” concluded Nissen.

The European Ground Motion Service (EGMS), part of the Copernicus Land Monitoring Service (CLMS) and which has started its production phase, will aim to provide consistent, regular, standardised, harmonised and reliable information regarding natural and anthropogenic ground motion phenomena, over Europe and across national borders, with millimetre accuracy.