For a decade, International Day of Forests on 21 March, has marked an opportunity to raise awareness about the importance of forests. About 30% of Earth's surface is covered by forests, but their area is declining annually through small scale disturbances such as illegal logging, or conversion of forestland for agriculture, clearing to pastures for livestock and urban landscapes.

Forests play a critical role in Earth's climate by providing a carbon sink. They sequester large quantities of the carbon dioxide, including that released by human activities. However, an estimated 20% of anthropogenic greenhouse gas emissions are then released back into the atmosphere through deforestation.

As we work towards net zero carbon solutions, it is vital to know how much carbon is being held in forest biomass and monitor change in biomass carbon stock. In this regard, the consistent temporal radar observations from Copernicus Sentinel-1 are adding precious value to scientific efforts to track the state and dynamics of forest biomass globally.

Copernicus Sentinel-1 data contribute in particular in regions with sparse cover, such as boreal regions and savannahs. The temporal density of Sentinel-1 radar is key. The project has already produced several global maps spanning the 2010s, which reveal some broad-scale emerging trends in biomass dynamics.

"CCI Biomass profits a lot from the repeated views allowed by Copernicus Sentinel-1. A single Sentinel-1 image may not be sufficient to monitor the structure of a forest and its biomass. But if you take many Sentinel-1 views of the same forest, for example over the course of a year, you can squeeze out much more information" explains Maurizio Santoro, a technical lead in the global biomass retrieval team within ESA's CCI+ Biomass project.

The maps integrate multiple acquisitions from radar and LIDAR data by using different sensors: Copernicus Sentinel-1 and Japan's ALOS-2, plus recent spaceborne LIDAR from ICESat-2 and GEDI. The project has already achieved maps for three epochs (2010, 2017 and 2018) in order to examine inter-annual biomass changes as well as decadal trends.

"In the next phase we are going to look at the evolution of biomass. We will map every single year in the Sentinel era, from 2015 to 2022, as well as mapping selective years in the pre-Sentinel era" adds Santoro.

Researchers at the Geo-Information Science and Remote Sensing group at Wageningen University, have now leveraged the CCI Biomass maps to estimate local carbon losses caused by deforestation [2]. Thanks to a fully operational, openly available rapid alert system for tropical deforestation, the new research reveals inter-annual hotspots of carbon loss across the expansive rainforests of central Africa.

Radar satellite imagery from Copernicus Sentinel-1 was used to create a near real-time deforestation alert system [3]. The team developed the Radar for Detecting Deforestation (RADD) alert product, which provides weekly updates on small-scale forest disturbances such as selective logging, construction of new logging roads, illegal deforestation and mining. The RADD alerts are also available on the Global Forest Watch platform.

The alert systems relies on open-data from Copernicus Sentinel-1 C-band (∼5.6 cm wavelength) radar and is now operational for the pan-tropics (44 countries). If areas of forest disappear, then a red marking appears on the map. A so-called "deforestation alert" is set-off, which enables rapid local intervention.

It is the consistent global temporal strategy of Copernicus Sentinel-1 which has proved to be hugely advantageous in this system.

Johannes Reiche, Associate Professor of Radar remote sensing in Wageningen, says, "Thanks to Copernicus Sentinel-1, for the first time we have a high frequency of radar observations available for the tropics, thus making near real-time monitoring possible. This is particularly useful for areas with large cloud coverage. Optical data for very cloudy areas, such as Gabon, can mean observations are limited to only one or two a year. Short wavelength C-band is considered less suitable for forest change monitoring than long wavelength L-band. However, the dense observation frequency of Sentinel-1 in combination with high spatial resolution can overcome this shortcoming". 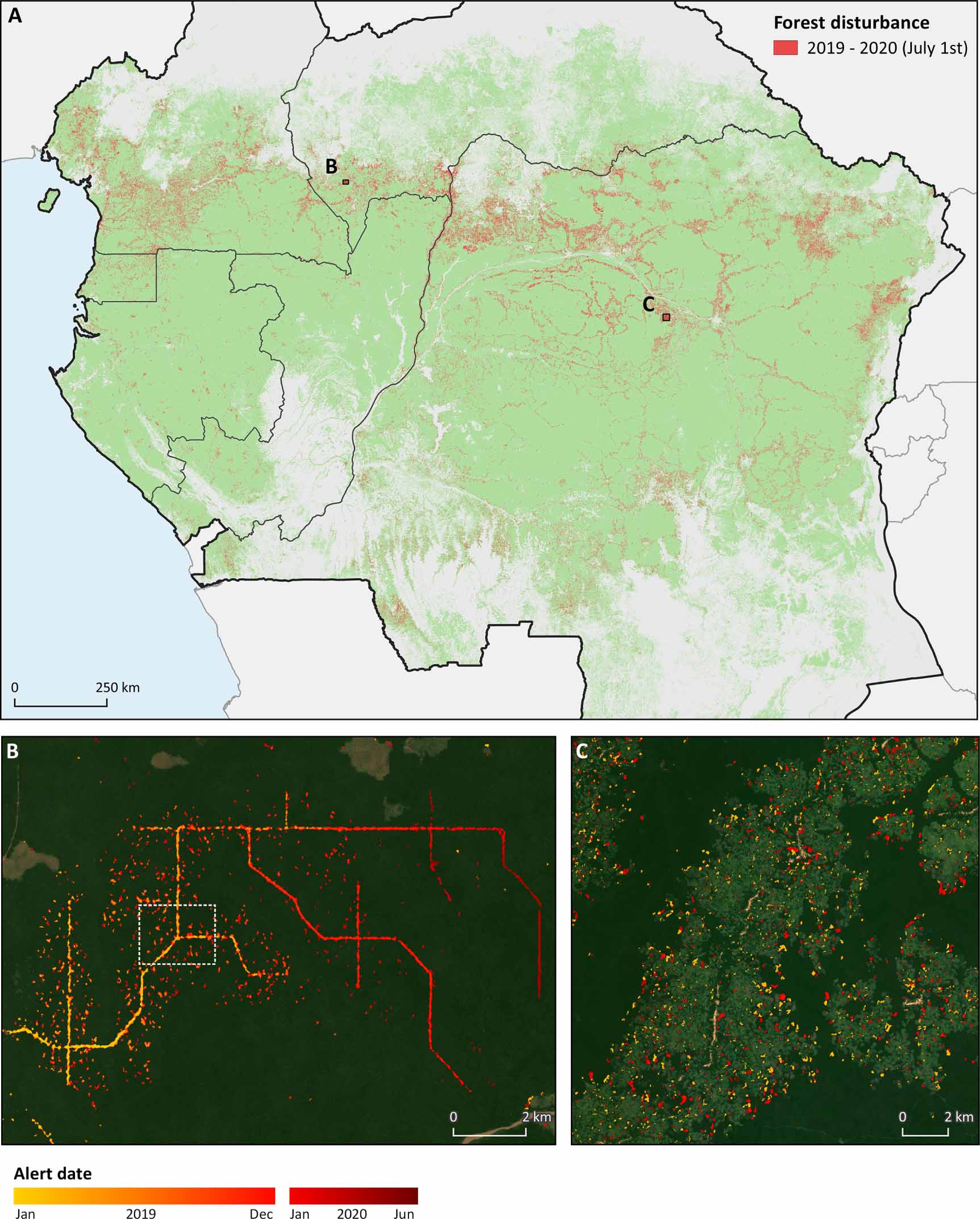 In RADD a new forest disturbance alert is based on a single Copernicus Sentinel-1 image, while subsequent observations are used to increase confidence and confirm or reject the alert.

"Until now, carbon-loss estimations are usually calculated at an annual level. Since we are using frequent radar data, we can combine weekly or monthly forest disturbance alerts with forest biomass maps to identify spatial and temporal carbon-loss hotspots" concludes Reiche.

The Copernicus Land Monitoring Service (CLMS) provides geographical information on land cover and its changes, land use, vegetation state, water cycle and Earth's surface energy variables to a broad range of users in Europe and across the World, in the field of environmental terrestrial applications.