At the end of April 2021, an iceberg with its longest axis of about 7.3 nm approached eastwards through the Scotia Sea, towards Saunders Island in the Southern Atlantic Ocean.

With a size of about 40 km2, similar to that of the tabular iceberg, the island is of volcanic origin and situated in the central part of the South Sandwich Islands on the East Scotia Ridge. Its highest elevation is the Mount Michael volcano at 990 m, which has erupted repeatedly since 2000, and whose summit crater contains a persistent lava lake—one of only eight in the world. 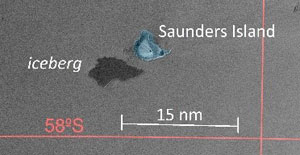 Data from the Sentinel-1 mission of the European Union's Copernicus Programme documented the situation. Images show the tabular iceberg very close to the southern coast of Saunders Island (image 1). Because of its volcanic origin, the island has no distinct shelf but a steep slope, which allows the iceberg to drift very near the coastline, despite its assumed draught of several decametres.

Synthetic Aperture Radar (SAR) has the advantage of operating at wavelengths not impeded by cloud cover or a lack of illumination and therefore can acquire data over a site during day or night time, under all weather conditions. Copernicus Sentinel-1, with its C-SAR instrument, can offer reliable, repeated wide area monitoring.

This is shown by blown-up sections of the SAR images of 27, 28 and 29 April, (see the following images). The nearest documented distance between the iceberg and the coast measures only 500 m. 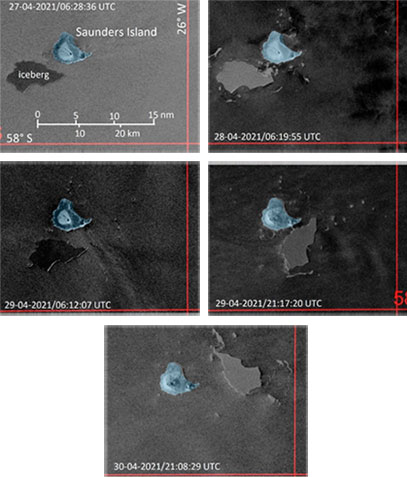 As the iceberg very likely was not grounded, its influence on the bottom and coastal flora and fauna should not have been of great damage.

For better comparison and to show the more dynamic drift of the tabular iceberg around the south coast of Saunders Island, the four images 2a and 2c to 2e are composed into one overlay image. 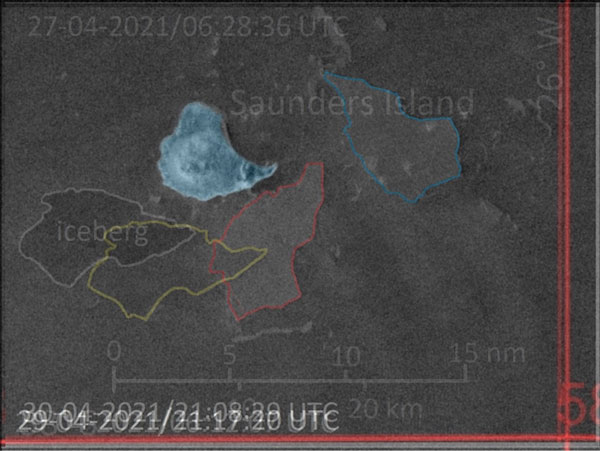 A Copernicus Sentinel-1 SAR image of 1 May, 21:01:06 UTC, shows the berg already a further 12 nm north-eastwards, moving away from Saunders Island with a speed of 0.5 knots for continuous, impending disintegration in the open Southern Ocean. 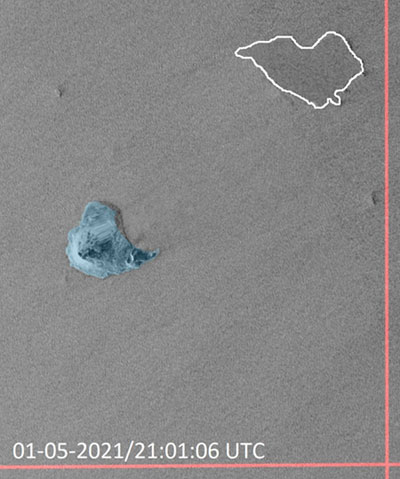 Former Director and Professor at BSH, Klaus Strübing, Member Emeritus at the International Ice Charting Working Group, states, "This event once again highlights the advantage of the Copernicus Sentinels to offer satellite data in NRT– here with SAR images. They assist ad-hoc documentation of special natural phenomena/events, for instance in the icy world – either with giant tabular icebergs as A68a or a small lonely one, which tries to kiss Saunders Island. These satellite images are essential for research and application, as for instance safe ice navigation, and therefore very much appreciated indeed."

Thanks to iceberg detection through the Sentinel-1 mission (providing coverage through its two satellites), the Copernicus Marine Environment Monitoring Service (CMEMS) is able to deliver automated iceberg detection products to the international ice charting community, supporting them locally in securing shipping routes. The service also delivers real-time information and up to 10-day forecasts on ocean conditions, with data on currents, waves, floating sea-ice concentration and thickness.

CMEMS provides regular and systematic reference information on the physical and biogeochemical state, variability and dynamics of the ocean and marine ecosystems for the global ocean and the six European regional seas, including the Arctic and Baltic.

This article was written with input from Klaus Strübing (International Ice Charting Working Group – IICWG), who downloaded, processed and closely observed the Copernicus Sentinel-1 images over the iceberg's drift.