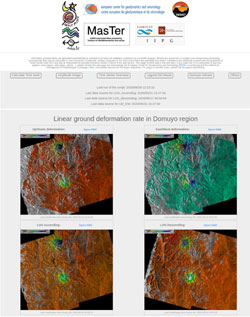 The recent development of MasTer tool – an InSAR automated Mass processing toolbox for multidimensional time series, is making a difference in the systematic and automatic use of Copernicus Sentinel-1 data for ground deformation monitoring.

In the past, the main impediment in applying Synthetic Aperture Radar (SAR) time series analysis for displacement monitoring was data provision, due to restrictive data policies, data cost and/or low observation frequency.

Today, the Sentinel-1 mission of the European Union's Copernicus programme greatly improves the situation: offering free data access, at systematic and recurrent acquisition pace. Furthermore, Copernicus Sentinel-1 satellites fly within a small orbital tube, granting baselines generally below 120 metres, whatever the considered image pair. The maintenance of the satellites within such a narrow orbital tube is made possible thanks to the execution of orbital manoeuvres on a weekly basis.

Funded by the Belgian Science Policy BELSPO (part of the STEREO programme), and the Luxembourg National Research Fund (FNR), the RESIST and MODUS projects contribute to understanding the source mechanisms that drive volcanic processes and landslides in different areas. It is in this frame, and to best benefit from the opportunity offered by the Copernicus Sentinel-1 mission, that MasTer tool was initially developed.

RESIST and MODUS are coordinated by the Royal Museum for Central Africa (RMCA), in collaboration with the National Museum of Natural History/European Centre for Geodynamics and Seismology (NMNH/ECGS), Centre Spatial de Liège (CSL), Belgian institute for Space Aeronomy (BIRA), and NASA for the RESIST project, and with the Ecole et Observatoire des Sciences de la Terre in Strasbourg (EOST) for the MODUS project.

MasTer Tool was tested and validated on several areas of interest. The largest test was conducted on the Virunga Volcanic Province, using a combination of more than 1,300 images acquired by ERS, Envisat, RADARSAT, COSMO-SkyMed, TerraSAR-X, TanDEM-X and Copernicus Sentinel-1 data, in ascending and descending geometries, leading to more than 6,500 interferograms and ultimately to uninterrupted 2D deformation time series spanning from 2003 to 2019.

It is also used to study landslide prone regions in South Kivu in DRC (MODUS project), or to monitor the Greater Region spanning the Grand Duchy of Luxembourg and part of Belgium, France and Germany.

The Copernicus Sentinel-1 data are currently being used to focus on the Laguna del Maule and Domuyo volcanoes, in the Neuquen Province, Argentina, which are known to undergo significant inflation up to several centimetres or tens of centimetres per year.

MasTer performs all its tasks thanks to a series of scripts launched by few command lines, which are easily integrated in cron jobs to become a fully automated tool. The whole processing chain makes use of single files, containing all the parameters required for the mass processing of each satellite mode.

The processing chain is designed to divide the work in several tasks, some of which can be run in parallel. These tasks are optimised, for instance by sharing intermediate results that are common between some steps. Computation of time series is incremental, hence when a new image is available, MasTer downloads it automatically, then computes the new interferometric pair formed using this new image, along with all the images already acquired that satisfy the pre-defined spatial and temporal baselines criteria.

The new differential deformation maps are then added to the existing database, to be inverted by MSBAS. To compute the 2D or 3D linear rates and the cumulative deformation maps and time series, the MSBAS inversion itself can take under to up to a few hours, depending on the size of the area and the number of pairs. All generated results are feeding a web page, giving access to updated results to interested users.

Copernicus Sentinel-1 data are freely available every 12 or 6 days along each orbit, depending on acquisition plans. Linear deformation rate maps and time series of vertical and East-West ground deformation computed by the MasTer tool are updated every 1-6 days on the web page, according to the Copernicus Sentinel-1 data availability. Interested users can request additional time series at coherent pixels that wouldn't be displayed on the web page, and receive them by e-mail within a minute.

The nearly 6 years long 2D time series of ground deformation allow highlighting recent changes in the well-known deformation of both volcanoes: Domuyo's inflation stabilised at the beginning of 2019, while deformation at Laguna del Maule seemed to gently accelerate since mid 2018. New deformation features are also identified in the time series, such as a 2 km wide 3 cm/year circular subsidence at Laguna del Maule, as well as a 2 cm/year downward and 1 cm/year eastward movement located to the East of Laguna Fea. 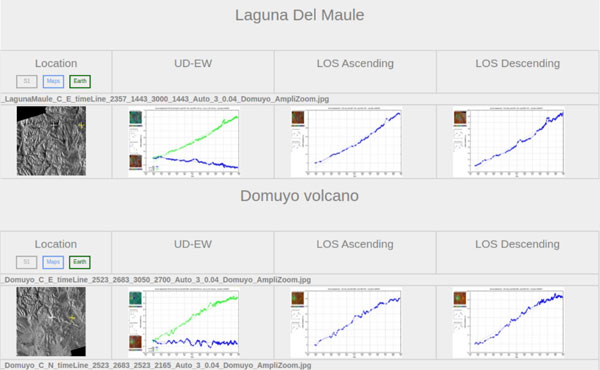 "Additionally, optimisation aspects in both terms of computation load and data storage are mandatory, if willing to maintain laboratory-scale facility. It is with this in mind, that MasTer tool is developed and is in constant evolution", concluded Dr Derauw.