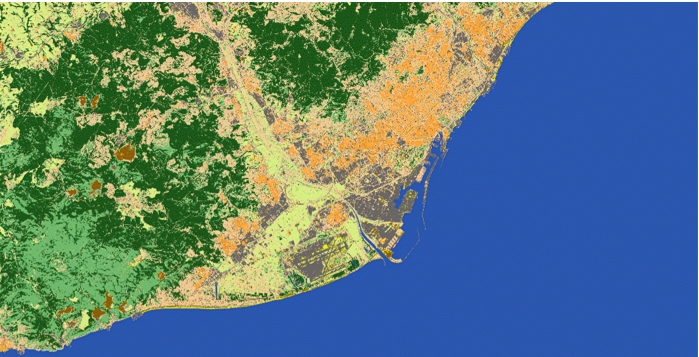 The ongoing effects of climate change could be devastating for coastal areas: sea level rise, more intense storm events and damage to coastal buildings and infrastructure can all have an impact on coastlines (both in terms of erosion and accretion), while producing repercussions on people, the economy and the environment.

The Coastal Erosion Project, led by ARGANS Ltd working in an international Coastal Change from Space consortium, financed by ESA, intends to develop monitoring services on this phenomenon, providing significant insights into determining where investments by governments should be focused and how corrective actions can be best targeted, in the framework of a climate adaptation strategy.

The Coastal Change from Space consortium brought together a professional team to capture the needs of its expert User Group comprising the British Geological Survey, IH Cantabria in Spain, Geological Survey Ireland, and ARCTUS Canada.

Representing the governments of the four nations, the expert User Group networked and engaged with a wide stakeholder community to understand and quantify the socio-economic and scientific value of delivering coastal erosion products from space.

Meanwhile, the Service Provider Group comprising ARGANS Ltd, AdwaisEO and IsardSAT, demonstrated how to derive 25 years of historic waterlines from both SAR (Synthetic Aperture Radar) and VNIR (Visible and Near-Infrared) imagery, using the Sentinel-1 and Sentinel-2 constellations of the European Union's Copernicus Programme, along with ESA's catalogue of Landsat and ERS/Envisat data.

These products have allowed the team to track real change over time and to enable those real changes to be measured within the uncertainties of the processing. A geolocation pre-processing approach has been adopted to co-register and improve the positional accuracy by a factor of four. These 2D vector lines have also been supplemented by feature mapping of the immediate coastal strip and combined with terrain modelling from satellite derived bathymetry and wave crest processing.

Such applications are of key importance for the countries involved in the analysis to help them mitigate the negative socio-economic effects of coastal erosion. In England, it is expected that by the 2080s up to 1.5 million properties (including 1.2 million homes) may be in areas with a 0.5% greater annual level of flood risk and over 100,000 properties may be at risk from coastal erosion.

Beach erosion can also represent a problem for Spain's tourism industry. River regulation and engineering, interaction between harbours and beaches, land reclamation and urban pressure together with Climate Change, are among the major causes of beach erosion along the Spanish coast.

In Ireland, less than 4% of the coastline is protected by shoreline defences and existing structures frequently have 19th century origin. These structures are unlikely to be able to cope with future sea level rise and linked changes.

A recent research report (May 2015) states that in Quebec a potential economic loss is estimated at 1.5 billion CAD, if no adaptation measures will be taken from 2015 to 2065 to protect transport infrastructure and buildings exposed to erosion.

"Monitoring coastal change is central to building more resilient coastal human-natural systems, but it is also a very labour intensive and costly task. Satellite observations have the potential to produce a step change on our current process, creating an understanding that will lead to better assessment of different coastal adaptation options and ultimately to safer and more resilient places", declared Dr Andres Payo, Coastal Resilience and Geohazard researcher at the British Geological Survey.