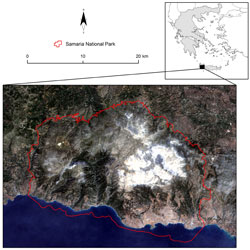 The conservation and protection of biodiversity is a fundamental activity of protected areas, such as the Samaria National Park, in Greece. The use of data from the Copernicus Sentinels, combined with geodiversity variables, are proving to be fundamental in monitoring certain areas where the Podarcis cretensis endemic lizard is found.

The fourth largest island of the Mediterranean, Crete hosts more than 50 mountain peaks that exceed 2000 m in elevation, the majority of them located at the west – such as the massif Lefka Ori. There, the Samaria National Park originates from the peaks down to the marine area, home to important seagrass meadows.

Mountainous areas like those in the Samaria National Park provide a diverse terrain where microclimate shapes ecological niches at local scales for animals and plants. Such areas also host endemic and rare elements of biodiversity, acting as islands of biodiversity. These processes can be identified by using high-resolution data, based either on satellite or airborne observations. 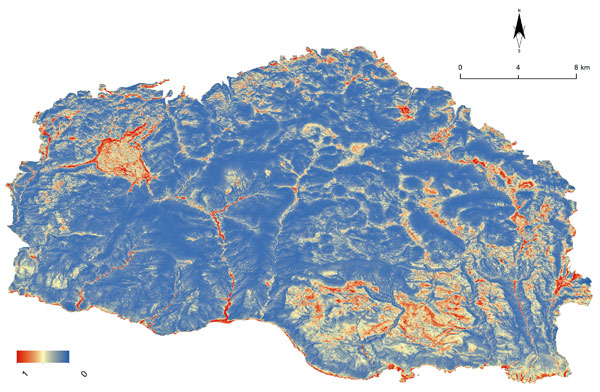 Today, Sentinels-1 and -2 of the European Union's Copernicus programme are filling this gap, by providing data of high spatial resolution with an adequate temporal resolution (10 m pixel size every 5 days).

In addition, the Copernicus Sentinel-1 constellation (-1A and -B) can provide terrain data (e.g. Digital Elevation Model) and related topographic parameters describing the geodiversity after the analysis within the open access ESA SNAP toolbox or QGIS.

Products from Copernicus Sentinel-1 and -2, combined with species observations in the framework of species distribution modelling, are a powerful tool in the arsenal of conservation ecology and planning. The high temporal frequency data of Copernicus Sentinel-2 provide information on landscape dynamics, such as the vegetation growth and changes in landcover, whilst Copernicus Sentinel-1 data give access to extracted information like elevation, aspect and slope, but also information relating to the incoming solar radiation and the terrain openness (e.g. sky view factor).

Lizards are dependent on the availability of sun for their needs, thus terrain parameters as well as vegetation dynamics are related to their ecophysiological demands. 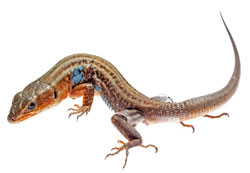 The conservation and protection of biodiversity is a fundamental activity of protected areas like the Samaria National Park, where the Podarcis cretensis is found. The conservation of its habitats provides a high ecosystem quality, valued by ecotourism visitors.

Protected areas require multiple tools for their daily activities. Copernicus Sentinel-2 data as Analysis Ready Data (ARD) via online platforms for use by non-experts in Remote Sensing, are very useful. A fully operational online Copernicus Sentinel-1 and -2 system, which will provide ready-to-use data, will benefit the technical staff of local authorities and parks as they will be able to use updated information without needing the technical expertise to process remote sensing data.

Dimitris Poursanidis, postdoctoral researcher of the Remote Sensing lab of the Foundation for Research and Technology Hellas (FORTH), states, "The use of Copernicus Sentinel-2 data in the calculation of spectral indices and the use in ecological modelling open new endeavours in spatial and temporal scales that have never been achieved with open access data".

ECOPOTENTIAL is a project funded by the European Union's Horizon 2020 research and innovation programme, which focuses its activities on a targeted set of internationally recognised Protected Areas, blending remote sensing Earth Observations with field measurements and data analysis. The project works side-by-side with 24 protected areas across Europe and beyond in providing the tools and models that make use of Sentinel data for addressing this specific monitoring need (among others).

This article refers to the work conducted within the framework of the H2020 project ECOPOTENTIAL (Grant Agreement n. 641762) by researchers from the Remote Sensing lab of the Foundation for Research and Technology Hellas (FORTH) and the Samaria National Park. Dimitris Poursanidis, Antonios Barnias, Petros Lymberakis and Nektarios Chrysoulakis contributed to this article.