A team of researchers in Cyprus have been studying how to use Copernicus Sentinel and Landsat data together, to improve the domain of remote sensing archaeology.

Nowadays, a variety of satellite images have become accessible to researchers, while big data cloud platforms allow them to deal with a vast number of datasets. Earth Observation sensors continually provide images with different spectral and spatial characteristics.

However, there is still difficulty related to these sensors meeting specific needs and challenges such as those of cultural heritage, and supporting archaeological research world-wide. The fusion and synergistic use of different sensors can be exploited to maximise the impact of Earth Observation sensors, thus enhancing their benefit to the scientific community.

Monitoring archaeological sites and monuments over large areas, including not only standing but also heritage remains well hidden under the ground's surface, is of great importance towards their preservation and protection against natural and man-made hazards. Observations from satellites can be used to detect buried, and still unknown archaeological remains, therefore providing additional insight to archaeologists studying an area, revealing lost landscapes that have been dramatically changed by modern development.

Detection of archaeological remains by satellites can be achieved through the study of spectral anomalies of soil or vegetation, which can be linked to the presence of subsurface archaeological remains. Archaeological proxies, such as soil and crop marks, can be depicted from multispectral datasets due to their different spectral signature in comparison to the surrounding area.

Dr Athos Agapiou, Senior Researcher in the Department of Civil Engineering and Geomatics of the Cyprus University of Technology and the Eratosthenes Centre of Excellence recently presented a preliminary study following this trend.

Sentinel-1 and -2 images of the European Union's Copernicus programme satellites were obtained through the Sentinel Hub, over the Thessalian plain in central Greece. 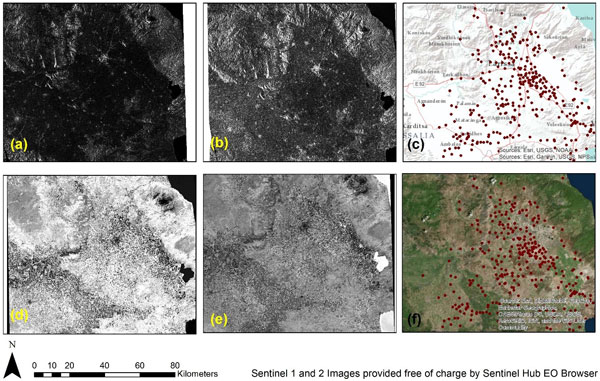 A binary classification was then performed, to evaluate whether the detection of Neolithic tells (artificial hills, called magoules) was feasible. For this reason, an existing archaeological geo-database provided by the Laboratory of Geophysical - Satellite Remote Sensing and Archaeo-environment of the Foundation for Research and Technology – Hellas (FORTH) was used.

The overall classification analysis was carried out several times (10 iterations), using random samples (60%) from the existing archaeological geo-dataset, while the overall outcomes were compared with the remaining dataset of the magoules. Details of the methodology are shown below. 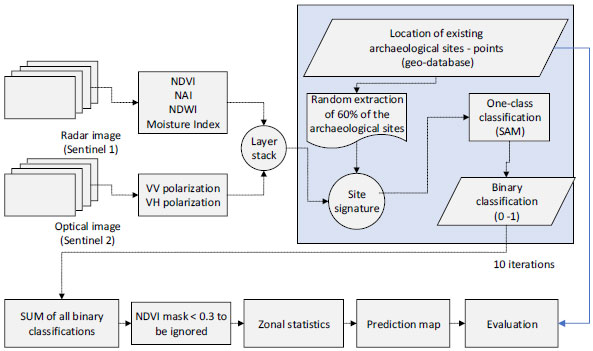 The global results are shown in the following image, indicating the geographical distribution of the total successful detections from the classification process (0: poor results – nothing detected, 10: perfect detection in all iterations).

Another example of work carried out by Dr Agapiou was recently presented through an investigation of the use of Landsat and Copernicus Sentinel optical sensors. This investigation was initiated by the fact that archival datasets are of significant importance for archaeological prospection studies, as they can reveal information over landscapes that have nowadays been transformed and dramatically changed, as mentioned before.

In fact, archival datasets (including aerial images, and images acquired by the CORONA reconnaissance satellite series and the Landsat satellite series), are sometimes the only source of information to retrieve a "view" of a -nowadays- lost landscape. This historical imagery spans the second half of the 20th century through to the present day satellite generations.

Despite the availability of this historical data, there are challenges in utilising historical and new satellite image data together. Archival data are sometimes "noisy", since images acquired at a medium resolution may not be suitable for detailed visual interpretation.

As stated by Dr Agapiou, existing known image fusion techniques to produce new products can be used, whereas archival data in conjunction with higher resolution (new) data from modern satellites such as Copernicus Sentinel-2 are merged together to support visual interpretation.

Whereas fusion techniques are usually used to improve the spatial resolution of multispectral images based on combining images close in time, Dr Agapiou used the same techniques to bring historical data and newly acquired data together. 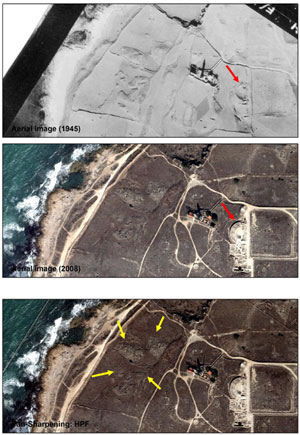 An example of this type of fusion is shown in the corresponding image, where an archival aerial image taken in 1945 over the UNESCO archaeological site of "Nea Paphos" (at the top of the image), in southwest Cyprus, was fused with a recent aerial image of 2008 (middle of the image). The new product (bottom of the image) was capable of preserving the information of the new image (2008) but also "visualises" linear archaeological proxies of the archive image (1945), which are no longer visible in the recent image (see the yellow arrows on the image).

It is also worth noting the semi-circular shape of the Ancient Odeon before its excavation, in the featured figure (red arrows on the image).

A preliminary study regarding the fusion of operational Landsat sensor, namely the Landsat 8, with the Copernicus Sentinel-2 was carried out recently by the team. In the background of this approach, the core idea is to explore in the near future other Landsat archives, e.g. images from Landsat 5 that predate the launch of Copernicus Sentinel-2, in order to "unlock" the archival Landsat record for the benefit of archaeological prospection. 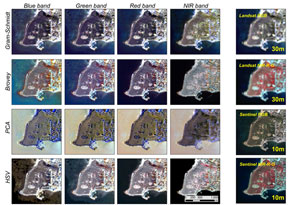 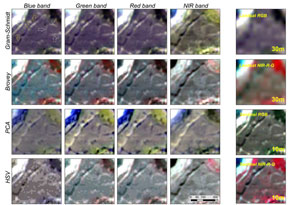 The next step of the study focused on the image segmentation process, through the evaluation of different scale factors. This process is an important step moving from pixel-based to object-based image analysis. The overall results showed that the Gram–Schmidt fusion method based on the near-infrared band of Copernicus Sentinel-2 (Band 8) at a range of scale factor segmentation to 70 are the optimum parameters for the detection of standing visible monuments, monitoring excavated areas, and detecting buried archaeological remains, without any significant spectral distortion of the original Landsat image.

Dr Agapiou relates his personal motivation to carry out such studies, by explaining the idea behind the integration of sensors, "This fusion example over the archaeological site of "Nea Paphos" and the Thessalian Plain, relied on the recent trends observed in Earth Observation towards the synergistic use of different space sensors. New opportunities can be raised by understanding potential synergies between various sensors, supported by big data analysis.

"New developments of Earth Observation sensors and developments of advanced image processing are some fundamental changes observed recently in the archaeological research domain. Synergies between existing and forthcoming sensors, especially those that are free and with open access, enable researchers to explore new ways of fusion and better integration of various datasets," further explained Dr Agapiou.

"These synergies could also support heritage management and archaeological prospections. This integration is not an easy task, but it could fill gaps observed using established methods. As our results have shown, difficulties still exist, and thus further research is needed. At the same time, efforts for integrating archival data (satellite and aerial), which are essential to better understand landscape changes, are fundamental for Earth observation applications in archaeological research," concluded Dr Agapiou.

Dr Agapiou would like to thank the "Copernicus Earth Observation Big Data for Cultural Heritage" (NAVIGATOR) project, co-funded by the Republic of Cyprus and the Structural Funds of the European Union in Cyprus under the Research and Innovation Foundation grant agreement EXCELLENCE/0918/0052.

Further work related to this article can be accessed from the Agapiou, A. Evaluation of Landsat 8 OLI/TIRS Level-2 and Sentinel-2 Level-1C Fusion Techniques Intended for Image Segmentation of Archaeological Landscapes and Proxies. Remote Sens. 2020, 12, 579 and the Agapiou, A.; Alexakis, D.D.; Hadjimitsis, D.G. Potential of Virtual Earth Observation Constellations in Archaeological Research. Sensors, 2019, 19, 4066. For the fusion of the aerial images of 1945 and 2008 over the archaeological site of "Nea Paphos" please refer to the Agapiou, A., Alexakis, D. D., Sarris, A., and Hadjimitsis, D. G. (2016) Colour to Greyscale Pixels: Re‐seeing Greyscale Archived Aerial Photographs and Declassified Satellite CORONA Images Based on Image Fusion Techniques. Archaeol. Prospect., 23: 231– 241. doi: 10.1002/arp.1536.