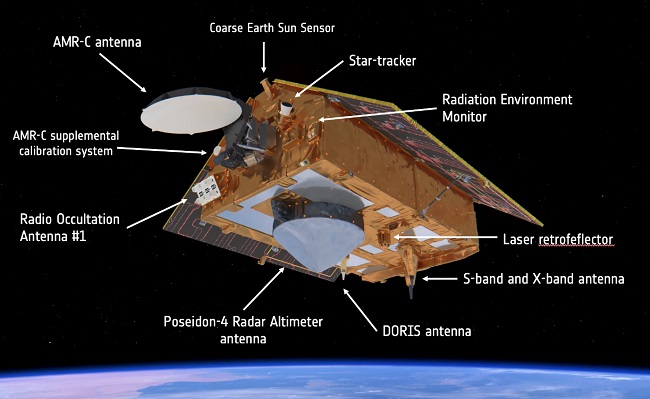 Three other instruments support the operations of the satellites:

As part of the international collaboration that is responsible for developing and operating the Copernicus Sentinel-6 mission, ESA developed the Poseidon-4 SAR altimeter, the GNSS POD receiver, and the REM; NASA developed the AMR-C, HRMR, the LRA and the GNSS-RO instruments.

Over the open ocean, ESA's CryoSat mission and more recently the Copernicus Sentinel-3 mission have demonstrated that SAR mode altimetry offers a significant improvement (a reduction of the random noise by a factor of ~3 compared to the LRM mode) to both range noise and σ0 measurements.

Poseidon-4 acquires data simultaneously using SAR processing and conventional Low Resolution Mode (LRM) approaches. An open burst transmit and receive approach means that double the number of samples are available compared to Sentinel-3 SRAL. Through this design the introduction of SAR technologies will not introduce a bias into the long-term sea level climate record. The concept is achieved by using a 9 kHz Pulse Repetition Frequency (PRF) that is approximately 4 times greater than Jason-3 and 0.5 times that of the Copernicus Sentinel-3 radar (SRAL) altimeter. Due to the increased number of radar looks at a given location, SAR mode is particularly beneficial over river and lake targets. 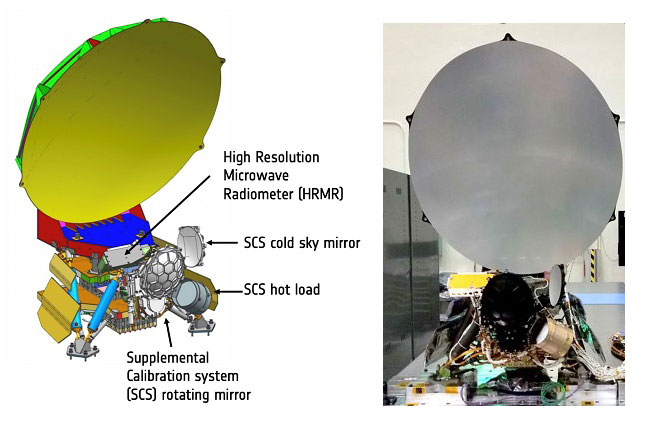 The Advanced Microwave Radiometer for Climate (AMR-C) aboard the Copernicus Sentinel-6 mission primarily provides data necessary to generate a correction for the delay (slowing) of the Poseidon-4 pulses due to atmospheric water loads. The water vapour content within the troposphere exhibits large spatial and temporal variability, which is difficult to model commensurate with the space and time resolution of the altimeter measurement. The radiometer also provides an atmospheric attenuation correction of the altimeter surface backscatter due to rain, clouds and water vapour.

The Poseidon-4 altimeter measurements require an accurate determination of wet tropospheric path delays for sea level monitoring over a range of 0-40 cm. To address this issue, the AMR-C will measure brightness temperatures used to retrieve the wet-tropospheric correction, with an uncertainty better than 1.2 cm for a single 1 Hz measurement.

The AMR-C measures linear polarised brightness temperature (TB) at 18.7, 23.8 and 34 GHz. The three-frequencies are used to separate the three dominant components of the TB signal to estimate wet path delay: total atmospheric water vapour, total integrated cloud liquid water and wind induced ocean surface roughness. The spatial resolution of the measurements in all channels is less than 35 km and the antenna beams are equalised in the along track direction using along track averaging and therefore only differ slightly across-track.

The High-Resolution Microwave Radiometer (HRMR) is an experimental system included in the AMR-C design that supports the high-resolution SAR mode of Poseidon-4. As a supporting instrument, the HRMR has no mission requirements or objectives. The instrument includes millimetre-wave channels at 90, 130 and 168 GHz. These channels will extend the microwave retrievals closer to the coast under cloud-free conditions on an experimental basis.