The Copernicus Sentinel-1 satellites are being used to detect and better evaluate management practices of grasslands in Estonia.

Grasslands are those areas on Earth where vegetation is dominated by grasses, which can vary in height from very short to quite tall.

Grasslands play an important role in agriculture and the economy. They cover some 37% of Earth's land surface when calculated with shrub-lands and savannas. In Western Europe, grasslands comprise 40% of agricultural land.

Earth observation satellites are playing an increasingly relevant role in monitoring and assessing the health of grasslands, and in evaluating management practices.

Since 2015, the Tartu Observatory, its spin-off KappaZeta Ltd and software integrator CGI have actively pursued the goal of creating a system capable of detecting grassland management practices based on Sentinel-1 and Sentinel-2 data. 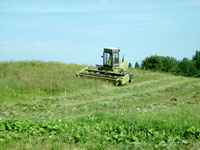 The application can have a great potential in the context of the European Union's Common Agricultural Policy (EU CAP), where one of the requirements for subsidy payments is regular mowing of the grasslands. So far, checks have mainly relied on inspectors, but field visits are expensive, time-consuming and can never cover the entire country. Applying satellite remote sensing for inspections is a logical technological step forward. This would also help to reduce manual labour while giving a more objective picture of the condition of agricultural grasslands throughout the EU.

As a collaborative project between the Tartu Observatory and CGI, an automatic satellite-based grasslands mowing detection system has been in development in Estonia since 2016. This year, it is being validated countrywide and in 2018 the system will become operational.

An ESA-funded mowing detection user trial project has also just been launched in Denmark and Sweden. The project, run by KappaZeta, aims to enable automatic mowing detection work in other EU countries, taking into account the varying climatic, ecological and agricultural conditions.

Synthetic aperture radar (SAR) data, provided by the Copernicus Sentinel-1A and -1B constellation, gives unprecedented time series of acquisitions suitable for interferometric SAR (InSAR) analysis. With a repeat cycle of six days, it is possible to evaluate changes in different land cover classes via interferometric coherence that measure temporal decorrelation. In general, forests and vegetation have low coherence values, while open and unvegetated areas can maintain high coherence over time.

A study was carried-out in the Rannu parish of Central Estonia, a relatively flat area predominantly used for agriculture, to describe the relationship between the C-band SAR interferometric coherence and the mowing of grasslands. 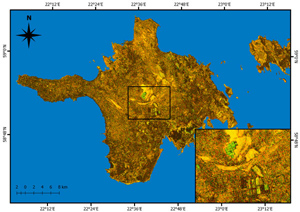 The main focus was on the impact that temporal separation between mowing and interferometric acquisitions had on coherence values.

From May to September 2015, six grassland areas were monitored on a weekly basis, providing information about the vegetation height, wet and dry above-ground biomass, and soil moisture.

Coherence values for each of the six measurement areas where vegetation parameters were recorded throughout the summer were given for VH and VV polarisations, respectively. The time series illustrate the complexity of the relationship between mowing events and coherence.

Mowing was rarely characterised by the complete removal of vegetation, with grass of 0.1 to 0.2 m high left on the field. Very high coherence caused by coherent scattering from soil was rarely observed. Even when bare soil was present, coherence values fluctuated. A clear and statistically significant correlation between the mowing event and the increase of coherence in the Sentinel-1 time series was still observed.

Kaupo Voormansik, SAR expert at KappaZeta Ltd., says, "Sentinel-1 six and twelve day coherence has a strong potential for land applications, but is still very rarely used. For numerous applications coherence is a much more useful and reliable parameter than backscatter. Grasslands mowing detection is just the beginning."

The Copernicus Land Monitoring Service (CLMS), which has been operational since 2012, supports applications in a variety of domains such as spatial planning, forest management, water management, and agriculture and food security. It consists of three main components (a global component; a Pan-European component; and a local component), where the Pan-European one, coordinated by the European Environment Agency, produces High-Resolution Layers describing the main land cover types: artificial surfaces (e.g. roads and paved areas), forest areas, agricultural areas (permanent grasslands), wetness and small water bodies.

Additionally, the Sentinel-2 data allows the CLMS to develop a phenology service product, which exploits the high acquisition frequency and spectral richness of Sentinel-2. This high resolution phenological information will contribute to the improvement of the quality of existing HRL Copernicus products relating to grasslands.

Whereas Sentinel-2 is the key Sentinel mission to support the generation of such data sets, the Sentinel-1 radar mission, with its advantage of systematically producing imagery regardless of clouds, potentially offers very good complementarity to optical missions. Sentinel-1 is being used for the global component of the Copernicus Land Monitoring Service, for the operational retrieval of Surface Soil Moisture (SSM) information data.