Scientists are using the Copernicus Sentinels to track the impacts of the searing heatwaves and fierce wildfires that are gripping parts of the continent this summer.

Long-term datasets drawing on satellite data show that these sweltering conditions are part of a wider global pattern, in which extreme weather events are increasing in frequency and severity.

During July, heat warnings were issued across Europe – including the UK, France, Spain and Portugal – with record temperatures being reached in some areas.

Copernicus Sentinel-3 of the European Union’s Copernicus Programme provided a snapshot of this extreme weather by observing land surface temperature, a measure of how hot Earth’s surface would feel to the touch.

Scientists monitor the land’s temperature because the warmth rising from Earth’s surface influences weather and climate patterns. These measurements are also used in many industries, including agriculture and urban planning.

Generated from data collected by the satellite’s radiometer instrument, the image below – which captures France, Spain and northern Africa – shows land surface temperatures of 55°C in places. 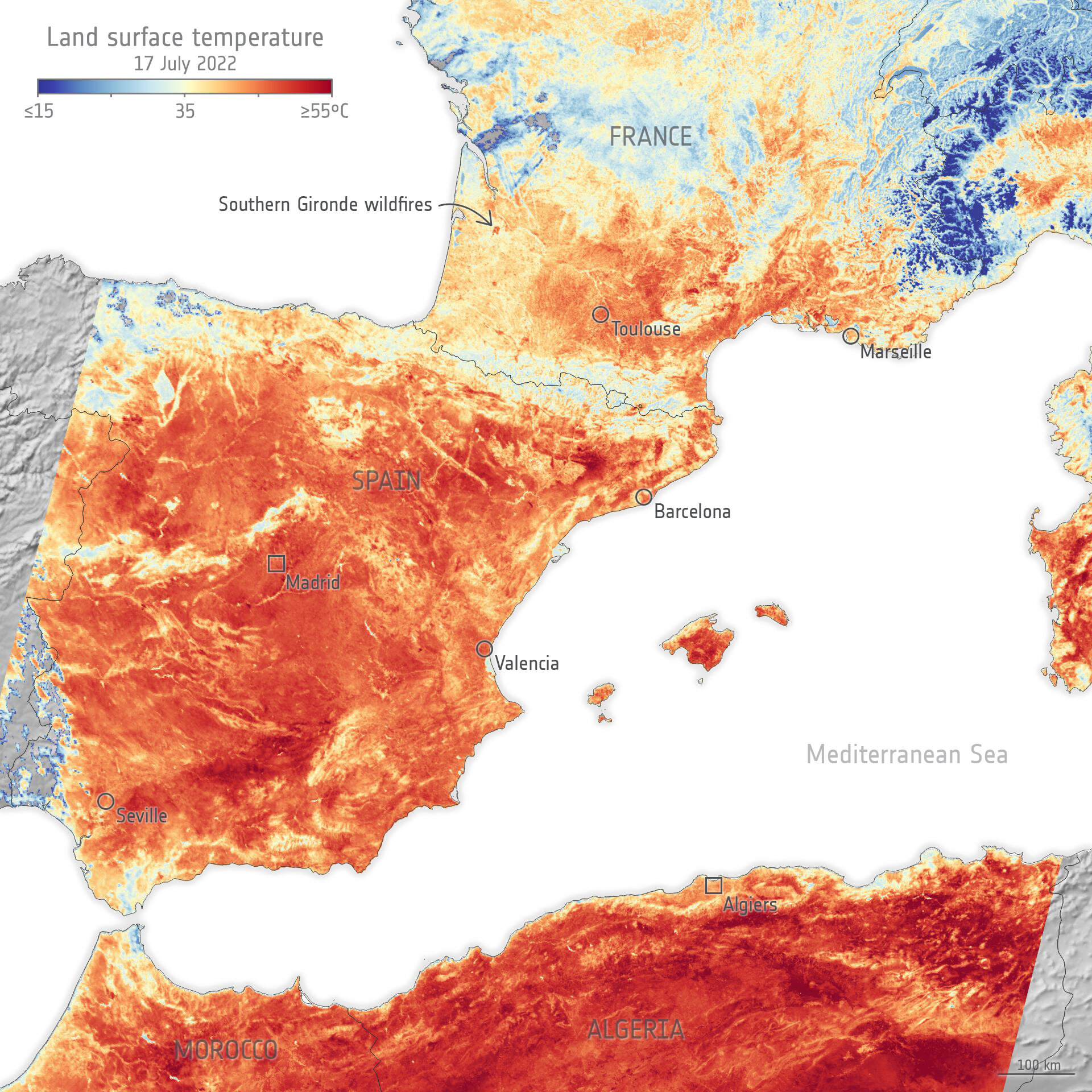 Across the English Channel in the UK, these temperatures reached 48°C in some central areas, smashing the national record. 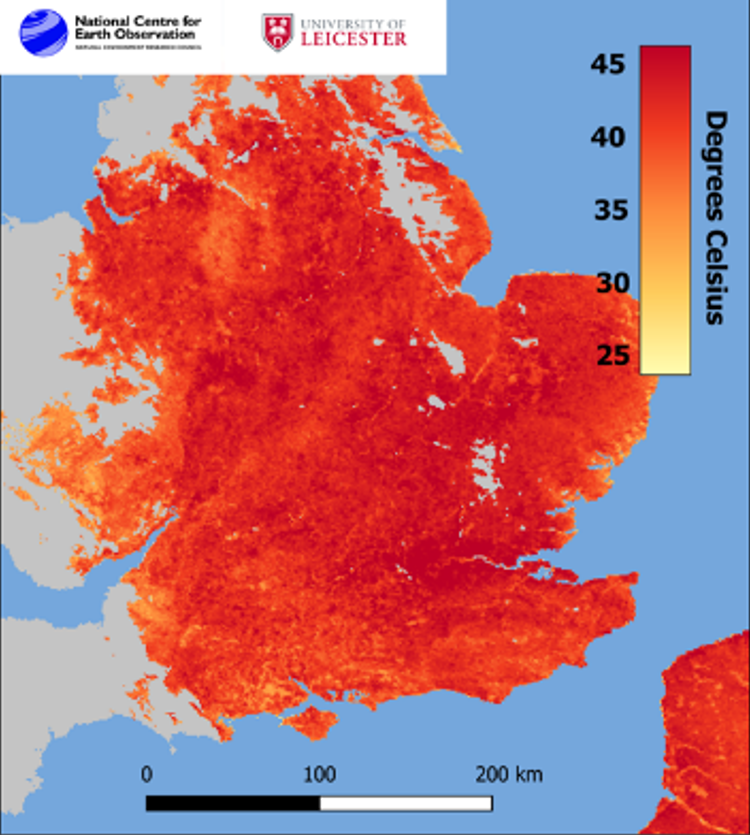 These hot and dry conditions are conducive to the ignition and spread of wildfires, as recently seen across Europe, for example in the southern Gironde region of France

The animation below – captured by Copernicus Sentinel-2 – shows fires and burn scars around the commune of Guillos, in Gironde.

The images were captured by the mission’s innovative wide swath high-resolution multispectral imager, which has 13 spectral bands for a new perspective of our land and vegetation. Its shortwave infrared channel was used to highlight heat from the wildfire.

As well as monitoring extreme weather conditions as they happen, satellite data are being used to create decade-long time series to reveal the climate changes that are driving these events.

ESA’s Climate Change Initiative (CCI) – which is coordinated by the agency’s Climate Office in the UK – works with remote sensing experts across Europe to develop these long-term datasets.

In May this year, the CCI released a climate data record that detailed land surface temperatures across Europe between 1996 and 2020. It drew on data from several Earth observation missions, including Copernicus Sentinel-3.

Using data collected over decades, scientists have demonstrated that heatwaves and droughts are increasing both in intensity and frequency, making wildfires more likely to ignite.

Through the burning of vegetation, these fires could release huge amounts of particulate matter and greenhouse gases into the atmosphere.

Last month, the CCI launched a new data product that reveals areas burned by wildfires in more detail than ever before, helping scientists to improve their understanding of how these blazes impact the climate system.

This new dataset includes surface reflectance information from two sensors on board Copernicus Sentinel-3 – known as the Synergy (SYN) Product – the Ocean and Land Colour Instrument and the Sea and Land Surface Temperature Radiometer. This is accompanied by active fire information from the NOAA-20 and Suomi-NPP VIIRS sensor.

The improved burned area detection was achieved as a result of on-going algorithm development and the shorter overpass interval of Copernicus Sentinel-3A and -B, with the latter providing an almost daily temporal resolution.

The Copernicus Climate Change Service (C3S) supports society by providing authoritative information about the past, present and future climate in Europe and the rest of the world.

The Copernicus Land Monitoring Service (CLMS) provides geographical information on land cover and its changes, land use, vegetation state, water cycle and Earth's surface energy variables, to a broad range of users in Europe and across the World in the field of environmental terrestrial applications. It supports applications in a variety of domains such as spatial and urban planning, forest management, water management, agriculture and food security, nature conservation and restoration, rural development, ecosystem accounting and mitigation/adaptation to climate change.