Remote sensing of ocean colour from space began in 1978 with the launch of NASA's Coastal Zone Colour Scanner (CZCS). A number of other missions have been launched and more are planned by various space agencies. The International Ocean-Colour Coordinating Group (IOCCG) coordinates information relating to the various missions and instruments.

The key mission driver for the SENTINEL-3 OLCI instrument is continuity of the ENVISAT MERIS instrument capability.

The SENTINEL-3 OLCI instrument is based on the opto-mechanical and imaging design of ENVISAT MERIS. The instrument is a quasi-autonomous, self-contained, visible push-broom imaging spectrometer and incorporates the following significant improvements when compared to MERIS:

OLCI bands are optimised to measure ocean colour over open ocean and coastal zones. A new channel at 1.02 μm has been included to improve atmospheric and aerosol correction capabilities. Two additional channels in the O2A absorption line (764.4 and 767.5 nm, in addition to the existing channel at 761.25 nm) are included for improved cloud top pressure (height) with an additional channel at 940 nm in the H2O absorption region, to improve water vapour retrieval. A channel at 673 nm has been added for improved chlorophyll fluorescence measurement.

The OLCI swath is not centred at nadir (as in the MERIS design) but the whole field-of-view is shifted across track by 12.6° away from the sun to minimise the impact of sun glint (sun glint contamination affects more than half of the MERIS observations at sub-tropical latitudes). In addition, the OLCI instrument is mounted on the satellite to allow a direct view of the Earth, removing the need for an additional fold mirror as used by MERIS. 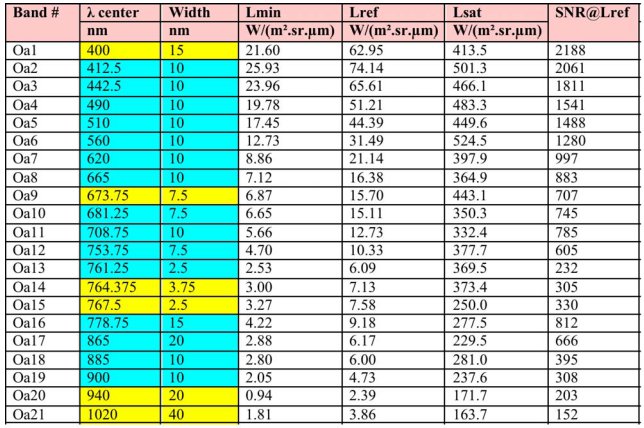