Before deriving estimates and uncertainties of BTs and radiances, the needed constants are defined and specific arrays are processed and generated. These arrays are contained in one of the four grid sizes defined in the Level-1B product: a 500 m nadir grid, a 1 km nadir grid, a 1 km oblique grid and 16 km x 1 km tie-point grid. The successive main processing steps are:

In the image grid for a particular channel and view, measurements from the detectors are interleaved in a quasi-random fashion, effectively determined by the satellite orbit and the surface topology in the Level-1B re-gridding process.

Radiometric quality files, one for each channel and view, hold measured in-flight values of detector noise over the two black bodies or, for the reflectance channels, one black body and the VISCAL unit. This information is held once per scan line in the measurement frame. For each scan, the nominal NEAT curve is rescaled to fit the measured values with small gain (~1) and offset (~0) adjustments and this adjusted curve is used to look up noise estimates for the brightness temperature pixels.

The following figure describes the succession of the different processing sub-steps. 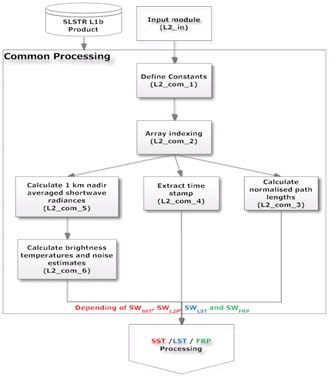