California, Oregon and Washington State have been burning for over a month now, leaving most of the western United States under smoke—data from the Copernicus Sentinel-2, -3 and -5P missions are providing a wealth of complementary information, needed to monitor the blazes.

Record high temperatures, thunderstorms and strong winds developed the critical conditions that allowed fires in western United States to spark and spread. Plumes of smoke from the fires were so extensive that they travelled across the US, reaching the opposite coast and even more incredibly also Europe, as depicted by NOAA.

The Sentinel-5P satellite of the European Union's Copernicus Programme, dedicated to monitoring air quality, detected the increased concentrations of a series of air pollutants as emitted by the fires along the US west coast. 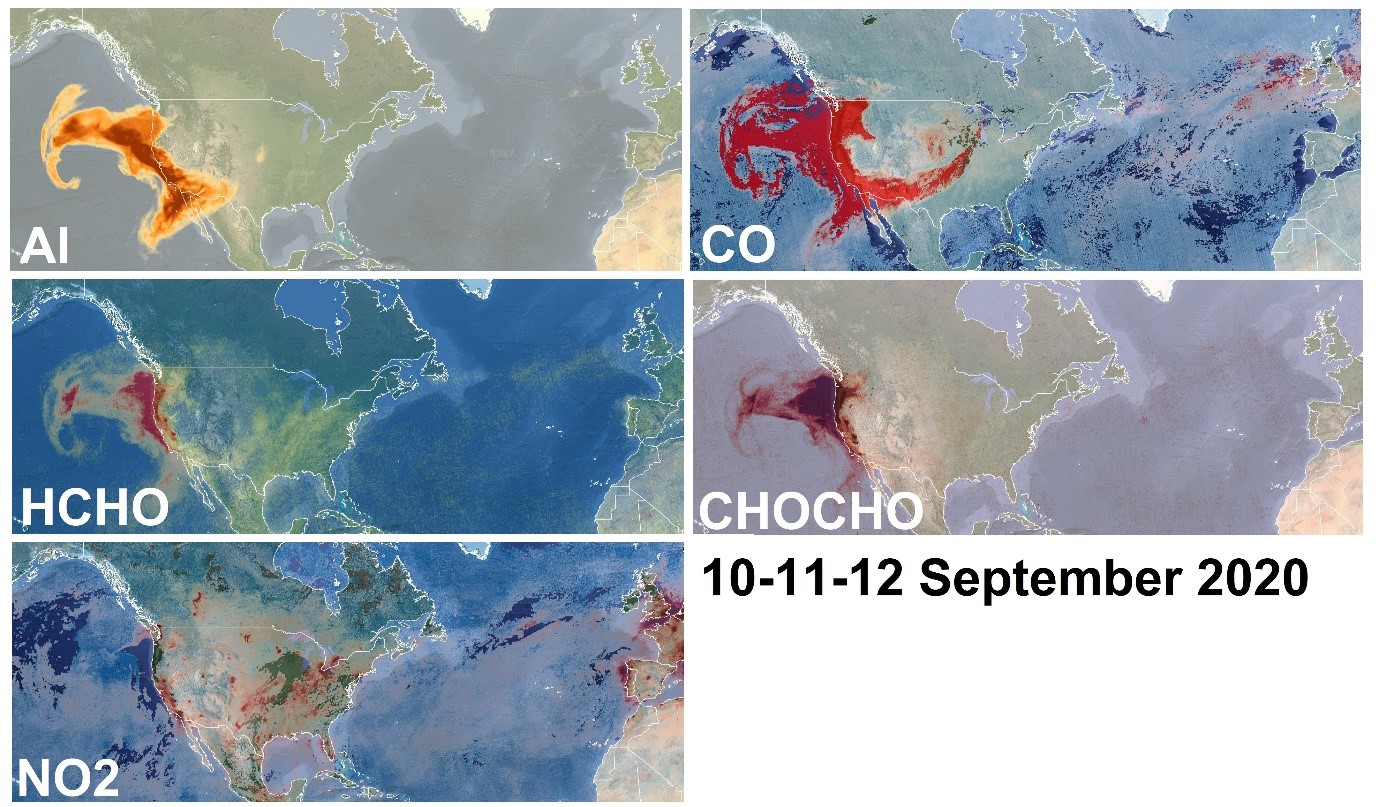 The TROPOMI instrument onboard Copernicus Sentinel-5P surpasses the performance of current in-orbit instruments in terms of sensitivity, accuracy, spatial resolution and temporal resolution.

While the main objective of the Copernicus Sentinel-3 mission is to measure sea surface topography, sea and land surface temperature, and ocean and land surface colour with high accuracy and reliability, to support ocean forecasting systems, environmental monitoring and climate monitoring, it is also useful in scenarios like those of wildfires, providing the Fire Radiative Power (FRP) and Aerosol Optical Depth (SYN-AOD) product exploiting the synergy between the SLSTR (Sea and Land Surface Temperature Radiometer) and OLCI (Ocean and Land Colour Instrument) instruments onboard Copernicus Sentinel-3.

A prototype World Fire Atlas has been developed showing the hotspots of active fires using the two fire channels of the Copernicus Sentinel-3A and Sentinel-3B SLSTR instrument.

The Copernicus Sentinel-3 SYN-AOD product, implemented by ESA, monitors the aerosol parameters over land and ocean hotspots detectable on Earth.

Copernicus Sentinel-2's high resolution capability was used to precisely monitor and characterise these wildfires. The featured colour composite provides a view of a pyrocumulus cloud forming over the complex wildfire in California, US,  in August. This image about 30km wide provides enhanced natural colours with IR overlay, showing the smoky, orange skies as seen by Copernicus Sentinel-2, while the featured photo provides a view of San Francisco from below the smoke clouds. 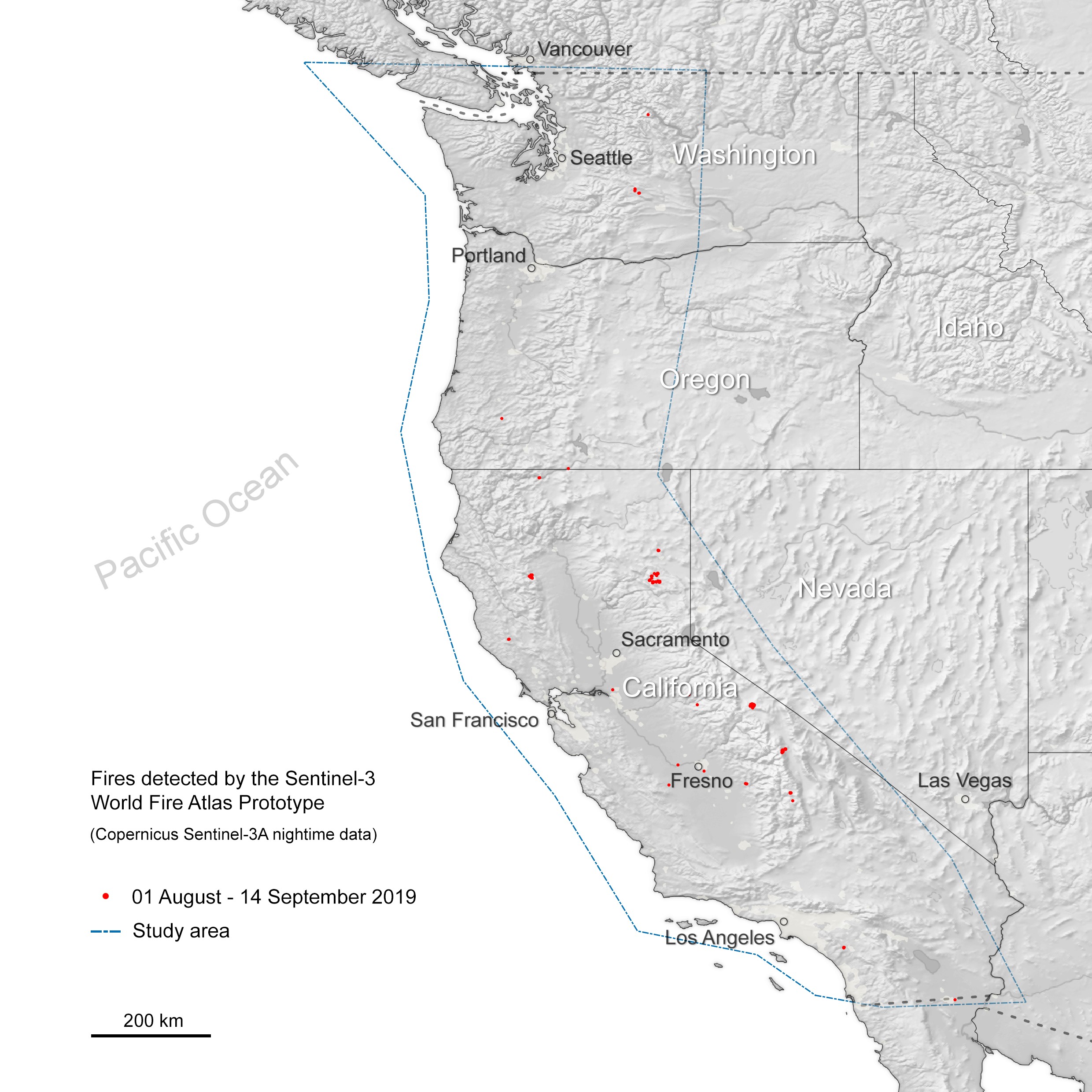 Scientist I. De Smedt, from BIRA-IASB, mentions: "Copernicus Sentinel-5P has the capability to measure different trace gases at the same time, providing complementary information. NO2, which stays in the atmosphere only for a few hours, can be used to identify where the air pollution is coming from (location of the fires). The NMVOC HCHO (formaldehyde) and CHOCHO (glyoxal) can be tracked further away in the direction of the fresh plumes and provide crucial information on secondary formation of pollutants, while Aerosol Index and CO can be used to follow the transport of air pollution over much larger scales. Simultaneous observations of multi species with TROPOMI is of high importance to monitor air quality during wildfire events." 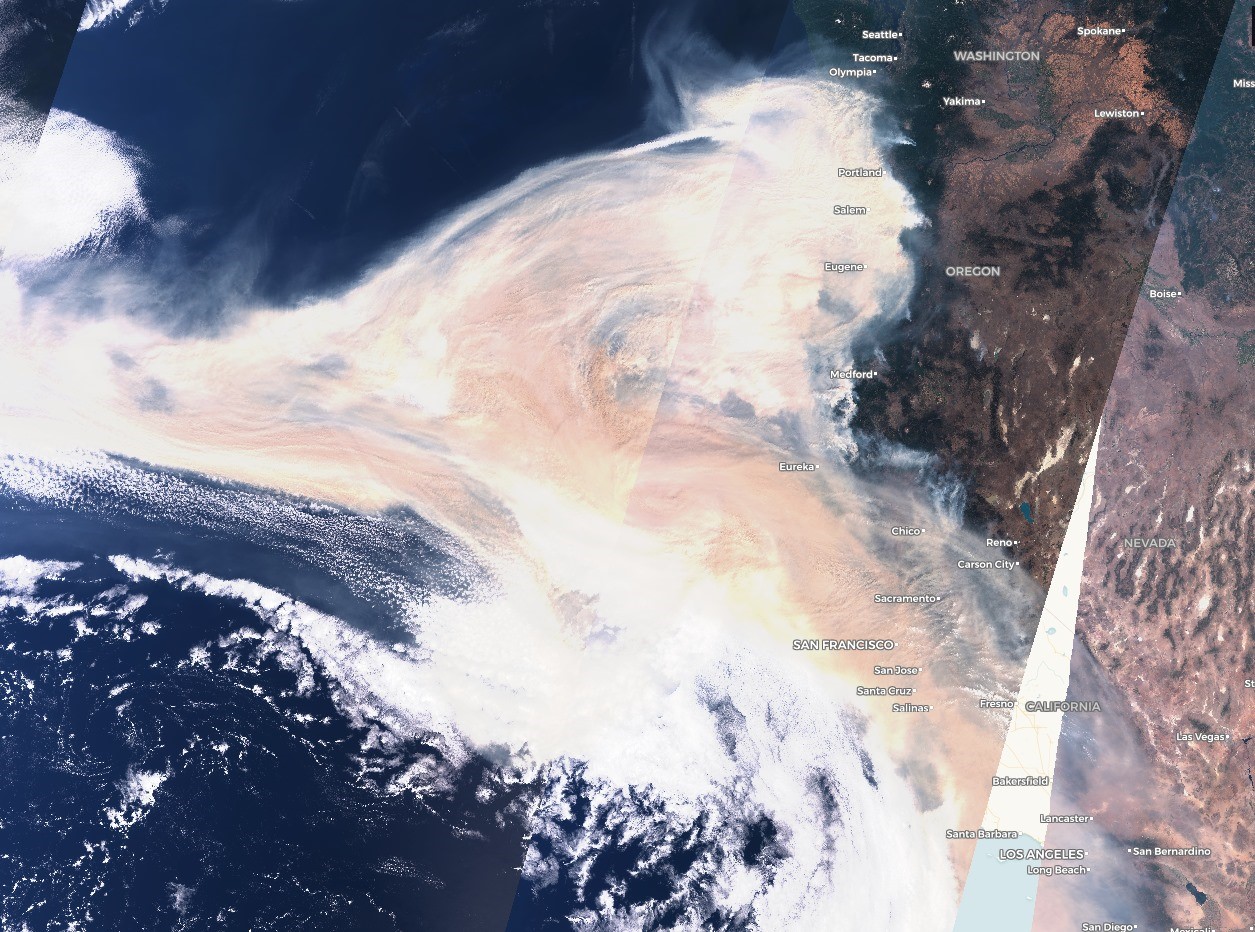 Claus Zehner, ESA's Sentinel-5P Mission Manager, adds, ‘By exploiting different measurement techniques of different Copernicus satellites at different times, these examples demonstrate that satellite measurements can contribute to the realisation of the  Convention on Long-Range Transboundary Air Pollution, often abbreviated as Air Convention or CLRTAP, which is intended to protect the human environment against air pollution and to gradually reduce and prevent air pollution, including long-range transboundary air pollution.'