SENTINEL-5P uses a high inclination orbit (approximately 98.7°). The orbit inclination is the angular distance of the orbital plane from the equator.

The orbital cycle is 16 days (14 orbits per day, 227 orbits per cycle). The orbit cycle is the time taken for the satellite to pass over the same geographical point on the ground.

An important feature of the SENTINEL-5P mission is the synergistic exploitation of simultaneous measurements of imager data from the Visible/Infra-red Imager and Radiometer Suite (VIIRS), embarked on the Suomi-NPP (National Polar-orbting Partnership) satellite of NASA/NOAA (NPP mission started in 28 October 2011). Indeed, VIIRS will be able to provide co-located cloud mask data with higher spatial resolution than the cloud mask computed from the SENTINEL-5P data. The SENTINEL-5P orbit is selected such that it trails behind Suomi-NPP by 3.5 minutes in Local Time Ascending Node (LTAN), allowing the SENTINEL-5P observation swath to remain within the scene observed by Suomi-NPP. This is shown in Figure 1. 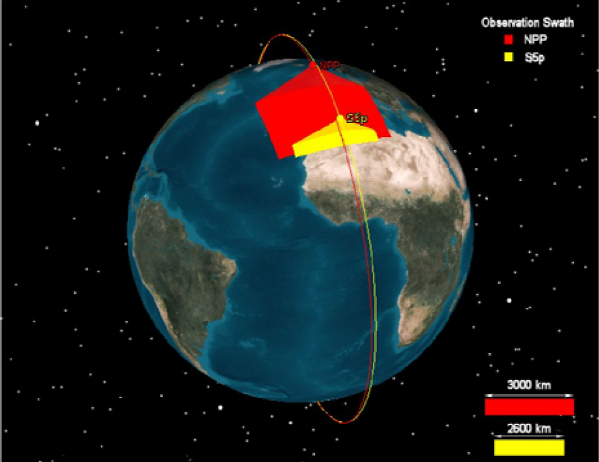