The Copernicus Emergency Management Service has been using Sentinel-2 satellite images to help in the assessment of damage brought forth by a series of disasters that struck Guatemala and Colombia this spring.

The Copernicus Emergency Management Service (EMS) Rapid Mapping, which has been operational since April 2012, provides information to respond to different types of disasters, including extreme weather events, geophysical events, deliberate and accidental, man-made and other humanitarian disasters, as well as prevention, preparedness, response and recovery activities.

From July 2017 to July 2018, 262 Sentinel-2 images were analysed to produce EMS Rapid Mapping products. Most images were used as pre-disaster reference data, in total 213, while 49 were used to produce post disaster maps and 61 maps were produced out of these. 80% were delineation maps (featuring the geographic extent of the damage) and the remaining 20% were grading maps (mapping the severity of the damaged features).

The ash fall and lahars affected different areas of Chimaltenango, Sacatepéquez and Escuintla. As of 4 June, 75 people died, 3,100 inhabitants were evacuated and over 1.7 million people were affected.

Before this, in April, the Ituango Dam (an embankment dam under construction on the Cauca river in Colombia), underwent falls of rock and soil, which caused a partial obstruction of a tunnel that diverts the Cauca River. The obstruction, combined with increased rains, disrupted the regulated flow of water prompting a threat of massive flooding in the Antioquia Province.

Approximately 120,000 people have been affected, of which 5,000, who live along the river, were evacuated by Colombian authorities.

In the case of the Guatemala volcanic eruption, the Copernicus Emergency Service was activated on 4 June, to produce delineation maps showing the extent of the damage and grading maps highlighting its magnitude over 8 Areas of Interest (AoIs).

One Sentinel-2 image was used to understand the situation before the event, necessary to produce the damage assessment maps covering the AoIs El Fuego Volcano and El Fuego Volcano North. See all of the maps from this Copernicus EMS activation.

The EMS Rapid Mapping was triggered on 22 May, to assess the risk of the Ituango Dam failure in Colombia.

For two of these AoIs, Ituango North and Ituango South, only Sentinel-2 images were analysed and used for the production of maps and to monitor the evolution of the event, with a total of 4 scenes. See all of the maps from this Copernicus EMS activation. 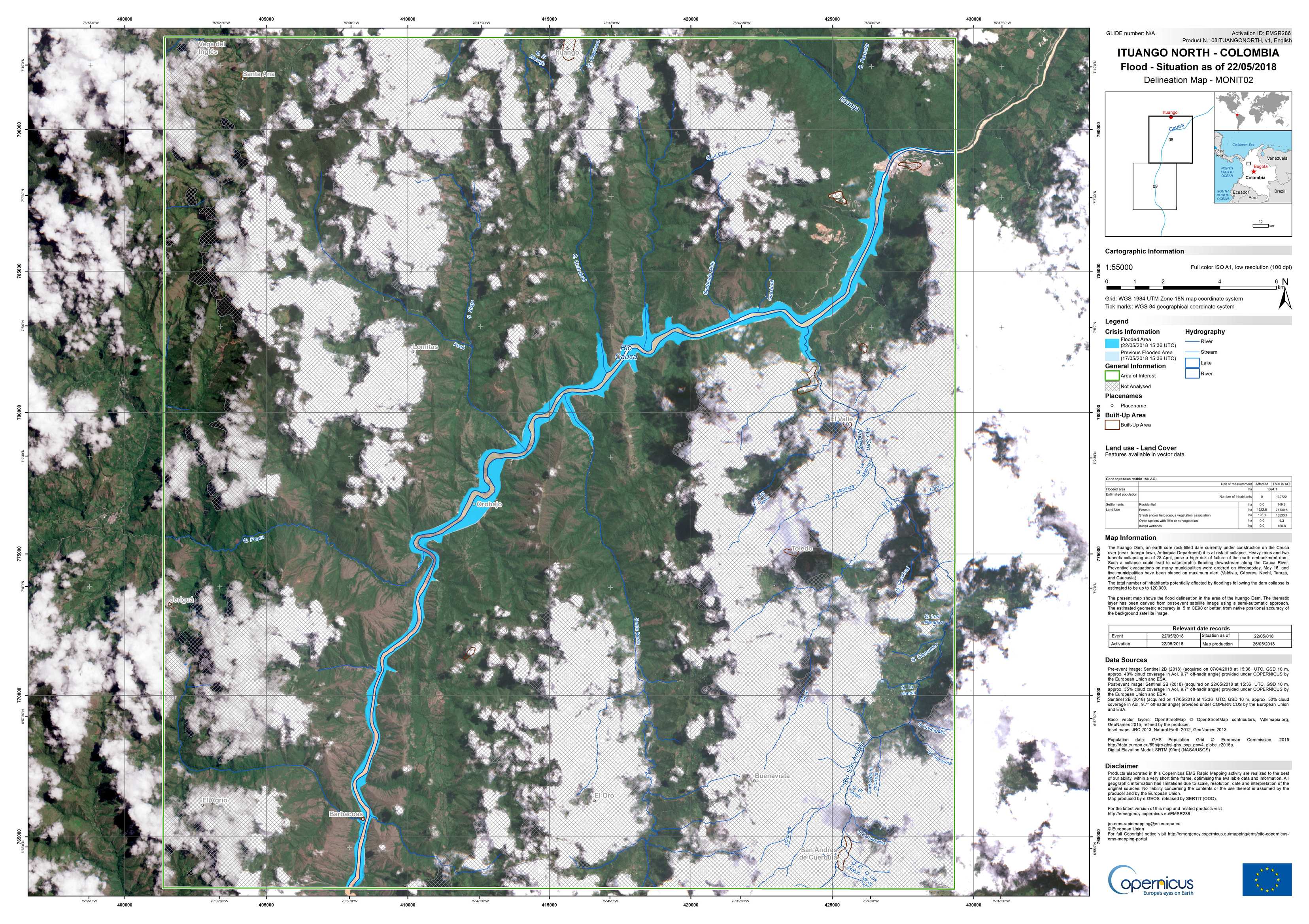 Dr Dalmasso, Technical Project Officer at JRC, states, "The high resolution Copernicus Sentinel-2 satellites bring a considerable asset to the Copernicus Emergency Management Service. Not only because they increase the response to emergencies like floods or volcanic eruptions, but also because their continuous and systematic acquisitions allow monitoring events that may lead to further damage and disasters. The Sentinels greatly contribute to the whole disaster management cycle, from the beginning to the end of its course."