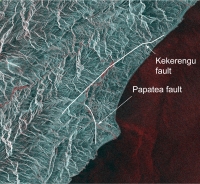 Satellites carrying synthetic aperture radar, in particular the European Union's Copernicus Sentinel-1 constellation, have become the standard instruments to measure coseismic displacements over large areas, critically contributing to improving our understanding of earthquakes. Together with high-resolution images from the Sentinel-2 mission on effects caused by earthquakes, such as landslides, floods, surface ruptures and other surface changes, the two missions offer unique possibilities to monitor disasters.

On 14 November 2016, a 7.8 magnitude earthquake hit near the town of Kaikoura in the northeast of New Zealand's South Island.

In terms of magnitude, it was the second strongest earthquake New Zealand had experienced since Europeans had first settled there. Surface ruptures happened at several faults, such as the Kekerengu Fault and Papatea Fault, which all are part of a fault system between the Australian and Pacific plates.

Media images after the earthquake showed significant surface ruptures, with vertical and horizontal motion clearly visible. A number of landslides were triggered and in some parts the seabed was lifted by several metres.

The radar signals from SAR satellites penetrate through clouds. This means that they can deliver important data in all weather conditions and regardless of day or night.

Traditionally, optical satellites have been used less to measure ground movement. However, Sentinel-2's frequent coverage and high-resolution imagery now also make it possible to use its data to measure horizontal components of seismic displacements.

The Sentinel-2 mission is based on a constellation of two identical satellites orbiting 180° apart for optimal coverage and data delivery. Together, they can cover all of Earth's land surfaces, large islands, and inland and coastal waters every five days at the equator. Sentinel-2A was launched on 23 June 2015 and Sentinel-2B followed on 7 March 2017. 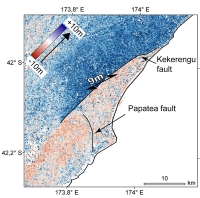 Scientists from the University of Oslo recently measured seismic displacements associated with the New Zealand earthquake from Sentinel-2A images.

Andreas Kääb, from the University of Oslo explained, "The lateral displacements revealed by Sentinel-2A are similar to those from Sentinel-1. This is potentially of great importance for disaster management because the visual information provided by Sentinel-2 helps to identify landslides, related floods, surface ruptures and other surface changes that can result from earthquakes.

"With the Sentinel-1 and -2 constellations, ESA and EU Copernicus are running a unique and highly complementary suite of instruments to investigate earthquakes and the consequences they bring.

"The Sentinel-1 radar constellation is providing lateral and vertical movements in all weather conditions. The optical Sentinel-2 constellation delivers lateral displacement which we can cross-validate with displacements measured by Sentinel-1, providing critical visual information about surface destructions."