An uncommonly mild and wet autumn in the Norwegian archipelago of Svalbard has had major consequences. High precipitation and warm temperatures recently sparked a large number of avalanches, as recent satellite data have shown.

In October, several landslides occurred in Svalbard, one of which was near Longyearbyen. It blocked a road and led to houses having to be evacuated. Moreover, the warm, wet weather has since continued.

Monitoring the consequences of such weather is difficult in the archipelago, more so as it is currently under polar night.

However, recent radar satellite images show that a large number of avalanches had also occurred in November. As the avalanches did not affect buildings and infrastructure, they were not identified from the ground.

The advanced radar satellites Sentinel-1A and -1B, operated by ESA as part of the European Union Copernicus Programme, acquire images every six days and sense changes on the ground, despite darkness and cloud cover, where optical satellites normally cannot ‘see'.

Andreas Kääb and Bernd Etzelmüller from the University of Oslo Geosciences Department have studied the data. "The images show a massive number of avalanches at different locations in Svalbard," Etzelmüller stated.

Andreas Kääb, who processed and analysed the images, was able to identify over 50 avalanches in the area between Longyearbyen and Barentsburg alone, "From the radar images it was difficult to detect exactly what kind of avalanches they were, but most likely snow that fell from higher areas into the valleys, possibly mixed with slush and soil. 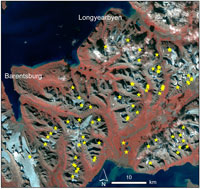 "Radar images are different from optical ones and are particularly sensitive to changes in ground wetness and roughness."

The avalanches can be detected in detail by comparing Sentinel-1's high-resolution interferometric wide-swath mode data (IW) from 6 and 12 November, but Sentinel-1's extra wide swath data (EW) with lower resolution contribute in specifying that the avalanches must have happened on 8 or 9 November.

The EW mode of the radar instrument is used largely to monitor sea ice in the Arctic, including around the Svalbard Archipelago, and therefore also regularly covers the Svalbard Islands. The EW mode features a large swath (400 km wide) and a resolution of about 50 m. The IW mode also presents a wide swath (250 km), generating images of pixel resolution in the order of 20 m. Both modes are suitable for large-scale mapping, a key characteristic of the Sentinel missions.

The researchers from Oslo University say that it is really unusual for so many avalanches to occur within a short time in Svalbard. They link them to exceptionally large amounts of snowfall at high altitudes over a short period.

"This highlights a strong imbalance in the natural and climatic system of Svalbard, and how sensitive this system is," the researchers explained.

Andreas Kääb adds, "Sentinel-1 was the only satellite to image these recent snow avalanches. There is no other means to observe such events in large, remote areas during polar night or when there is cloud cover.

"Similar data will also play a crucial role in preparing infrastructure and settlements for similar other events that could occur."

"In the future, we will likely see more extreme events like this one. This will require updated procedures for hazard management," Bernd Etzelmüller explained.

"Access to satellite data and the development of modern methods for analysing them are critical, in order to discover what happens in nature as a consequence of extreme weather events.

"It is more important than ever that responsible authorities take into consideration satellite data for such purposes," both researchers assert.