On 20 October 2016, the first operational data from the Copernicus Sentinel-3's Ocean and Land Colour Instrument were made available to users worldwide.

Carrying three instruments that work in synergy, Sentinel-3 is considered the workhorse of the family of Sentinel satellites.

Providing a new eye on Earth, one of these instruments, the Ocean and Land Colour Instrument (OLCI), is used to monitor harmful algal blooms and phytoplankton in the oceans, sediment transport in coastal areas and water quality in inland waters, to name a few applications.

It also helps with the observation of vegetation and crop conditions, bringing significant benefits to society through more informed decision-making.

OLCI will furthermore be used to provide estimates of atmospheric aerosols, in synergy with the Sea and Land Surface Temperature Radiometer (SLSTR), as part of Sentinel-3's core products, serving in atmospheric pollution forecasts, which will have an impact on climate studies.

OLCI has a swath width of 1270 km, allowing global coverage at the equator to be provided in 2-4 days with one satellite and in less than two days with two satellites. It is a push-broom imaging spectrometer that measures solar radiation reflected from Earth. Its primary objective is to screen the ocean and land to acquire information related to biology, for presence of algae in the oceans and status of plants over land, for instance.

A group of expert users that make up the Sentinel-3 validation team has been assessing sample OLCI data products since May 2016, quite early on in the mission. Their evaluation is fundamental for guaranteeing the highest quality data, as required for the multiple operational applications that the mission will serve.

Both ESA and EUMETSAT have been working with the Sentinel-3 validation team from the beginning of the mission to ensure users are fully involved in the assessment and evolution of the data products provided.

While the day-to-day mission operations of the satellite and instruments of Sentinel-3A were handed over to EUMETSAT at the end of the commissioning phase in July 2016, the mission is managed jointly by ESA and EUMETSAT in the operations phase.

ESA developed and built the Sentinel-3A satellite and will develop the subsequent Sentinel-3B, -C and -D satellites, and will also look after their health in space.

ESA is responsible for data covering land areas and EUMETSAT for marine areas - all of which are made available for applications to the Copernicus services, and to a wider scientific and operational user community in general.

An example of a data user that has benefitted from Sentinel-3 data is Dr Krista Alikas from the Tartu Observatory in Estonia.

She has been using Sentinel-3 data to study water quality in inland lakes, and says: 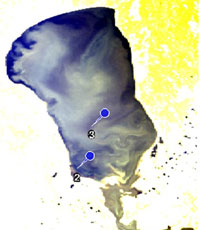 "We were very happy to see a first match-up already with OLCI data on 14 June, over Lake Peipsi in Estonia. While the measurements taken by the ground equipment in the lake showed higher Chlorophyll a concentration in particular locations, the OLCI data actually revealed the spatially inhomogeneous cyanobacteria bloom, Gloeotrichia echinulata, over the entire lake. This precisely points out one of the skills of spaceborne data over in situ data."

The OLCI top of atmosphere radiance data were processed with the Case-2 Regional/Coast Colour Processor, currently available to the Sentinel-3 validation team members to test its performance and support its activities. This processor retrieves the reflectance from the water, which corresponds to the information derived from the ground-based equipment in the lake, showing different degrees of water quality across the lake.

"Our team at Tartu Observatory is very excited about the encouraging results between the in situ and OLCI-based surface reflectance data. Building on experience gained with Envisat's MERIS instrument, we will continue with the development of the algorithms we use, as well as with the validation of our results over inland and coastal waters," continued Dr Alikas.

"Future work will involve further exploiting the temporal and spatial coverage of the OLCI data in the context of the European Union Water Framework Directive (2000/60/EC). This includes monitoring water quality indicators, such Chlorophyll a concentration, total phytoplankton biomass and transparency to report on the ecological status of Estonia's inland waters.

"As the changes related to phytoplankton and reduced water transparency have been associated with eutrophication and climate change, monitoring these parameters is essential to understand the past and present state of the aquatic ecosystems," concluded Dr Alikas."

The release of the OLCI data is also an important step towards other OLCI applications, for example monitoring plant health.

Nadine Gobron, from the DG Joint Research Centre of the European Commission, has been using the OLCI data to derive the evolution of characteristics of plant status over time, and comments on the wider picture of the availability of such data: "Capturing world-wide vegetation photosynthesis properties from space using observations in the optical to infrared spectral domain has a significant heritage, with past and current missions such as SPOT-VGT, MERIS, Landsat and Proba-V.

"With the launch of Sentinel-2A and Sentinel-3A missions, new observation means complementing the existing fleet of operational satellites, which provide land surface status information, are now available. The result is an unprecedented combination of spatial resolution, temporal revisit time and spectral coverage, to which the OLCI data are really contributing.

"Furthermore, uncertainties in our knowledge of these plant characteristics will decrease with the availability of such variety data," concluded Nadine Gobron.

To provide continuity to Spot VGT and Proba-V data products, also Sentinel-3 synergistic data products, including data from the SLSTR in addition to OLCI, will be provided. Level-1 SLSTR data were officially released on 17 November.

ESA's Sentinel-3 Mission Manager, Susanne Mecklenburg, is pleased that although Sentinel-3 only completed its initial testing phase in orbit in July 2016, users have already started benefitting from the mission's first data. She says: "Following the release of the OLCI surface reflectance and the SLSTR brightness temperature data, I am extremely pleased to see the positive uptake of this data in our user community.

"Data from the third instrument - the Radar Altimeter - will be made available soon. This is an important step towards getting ready to also produce higher level products in early 2017, for example land- and sea-surface temperatures and vegetation-relevant data, to name a few."

The Copernicus Services, coordinated by the European Commission, are developing and delivering numerous operational products to users. Some are based on Sentinel-3 data, such as LAI, FAPAR, Dry Matter Productivity, Snow area extend, Lake turbidity, Sea level and Sea surface temperature.