Sea ice is a rapidly changing phenomenon. Timely measurements over large areas, at high spatial and temporal resolutions, are fundamental for its surveillance.

The identification of risks and opportunities, such as the opening of shipping lanes, are possible thanks to satellite monitoring of sea ice.

Since 2015, following the various MyOcean programmes that first started back in 2009, the Copernicus Marine Environment Monitoring Service (CMEMS) has been providing regular and systematic reference information on the physical state, variability and dynamics of the ocean and marine ecosystems, for the world's oceans and Europe's seas.

The observations and forecasts produced by the CMEMS service support all marine applications. For instance, the provision of data on currents, winds and sea ice help to improve ship routing services, offshore operations and search and rescue operations, thus contributing to marine safety.

Satellites provide the majority of information about the development of ice conditions in the Arctic. Sentinel-1's C-band SAR, capable of monitoring irrespective of cloud cover or light conditions, makes it possible to observe sea ice with higher reliability than optical methods and with better resolution than passive microwave ones.

The Technical University of Denmark (DTU) first launched the Ice Drift Service of the Arctic in 2004, using Envisat data. The service became operational in 2009 within the MyOcean Copernicus Service, thanks to the availability of RADARSAT-2 data in addition to Envisat. Since October 2014, the service relies almost entirely on the provision of Sentinel-1 data.

The huge improvement over earlier ice-drift observations is down to the quantity and quality of the data. Thanks to the Copernicus free and open data, users now have total and costless access to Sentinel-1 data. 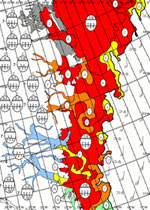 As a result, over 95% of the SAR data used today for sea-ice monitoring in Greenland are from the Sentinel-1A and -1B satellites.

Various national ice services such as the Danish Meteorological Institute (DMI) have been producing ice charts for over 50 years, from initial observations using aircraft, to satellite data. With RADARSAT and Envisat they made a jump in the way that sea-ice could be monitored, and Sentinel-1 has now become the main source of data for ice charting.

From the satellite images, analysts are able to extract how much ice there is over areas of interest and how thick it is, so that ice charts can be used to select the safest routes. The ice charts are also provided to the CMEMS, for assimilation and validation of ice forecasts.

During ESA's semi-annual data access review meetings with the CMEMS, data users, such as experts from DMI and DTU, discuss requirements with Sentinel Mission Managers so that mission planning can be further tuned to the needs of the CMEMS service.