Copernicus' Sentinel-1B satellite has officially completed its commissioning phase, marking the beginning of its operational life in orbit.

Its first observations were taken after a complicated routine, in which the satellite deployed its 12 m-long radar and two 10 m-long solar wings, as well as passing a series of initial checks, as part of the Launch and Early Orbit Phase (LEOP).

Its 250 km-wide first image captured part of Svalbard, the Norwegian archipelago in the Arctic Ocean, and clearly features the Austfonna glacier.

Engineers and flight operators then pursued commissioning – an important phase in the life of a satellite mission that involves a number of activities over several months, related to in-flight verification, characterisation and calibration.

The commissioning phase was successfully completed with the In-Orbit Commissioning Review (IOCR) on 14 September, confirming that the satellite is fully operational and ready to start its exploitation phase. This means that it now joins its twin, Sentinel-1A, in delivering radar images of Earth for Europe's Copernicus programme.

"This is a great achievement for the many people at ESA and industry, who have been involved in the development of the two Sentinel-1 satellites over the past years. I'm delighted to see the first Copernicus Sentinel constellation in place and ready for exploitation," said Ramón Torres, Sentinel-1 Space Segment Project Manager from ESA-ESTEC, responsible for the development and commissioning of the satellites.

"But this is not the end of the story; we are currently already developing the third and fourth units, which will ensure the replenishment of the two-satellite constellation in the coming years."

With a life-span of minimum seven years, at an altitude of 693 km in polar, Sun-synchronous orbit, Sentinel-1B has a revisit time of twelve days (at the equator). This is the duration of its repeat cycle, in other words after 12 days (175 orbits) the satellite again falls in the same orbit and viewing geometry. The repeat cycle of the two-satellite constellation is six days.

Weighing 2300 kg (including 130 kg of fuel), its main instrument is a C-band synthetic aperture radar (SAR) at 5.405 GHz, operating over land mainly in interferometric wide-swath mode, at 250 km and 20 m spatial resolution (for the Ground Range Detected product - GRD, 5 looks).

Both satellites in the mission carry this advanced radar, which images Earth's surface through cloud and rain, whether it is day or night.

On 16 June, as part of the commissioning phase, Sentinel-1B reached its orbital location following a series of manoeuvres, synchronised with Sentinel-1A at 180 degrees in the same orbital plane, and has since been under nominal orbital control, keeping it and Sentinel-1A within the same ground track of +/-120 metres.

Just like its twin, the satellite has now begun delivering radar scans for an array of operational services and scientific research in the areas of oceans, ice, land and emergency response. 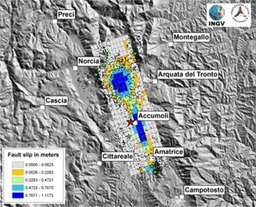 During commissioning, Sentinel-1B already demonstrated its potential in some application domains, imaging the effects of the earthquake that struck central Italy on 24 August.

Coordinated by the Italian Department of Civil Protection, scientists from Italy's National Institute for Geophysics and Volcanology and the Institute for Electromagnetic Sensing of the Environment of the National Research Council, used data from the two Sentinel-1 satellites and other spaceborne radar missions, to map surface deformations caused by the earthquake. 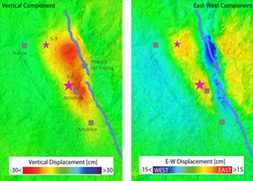 The experts discovered that the main deformation pattern showed subsidence reaching some 20 cm in the Accumoli area, and sideways movement of up to 16 cm.

By comparing radar images over the affected area taken before and after the event, scientists were able to map surface deformations. This is thanks to the technique of interferometry, which requires images taken in the same viewing geometry, i.e. distant from a repeat cycle or a multiple of repeat cycles: 12 days for one satellite, six days with two satellites.

The experts quantified the ground movement in both vertical and east–west directions, by combining the radar scans obtained as the satellites flew south to north and north to south. 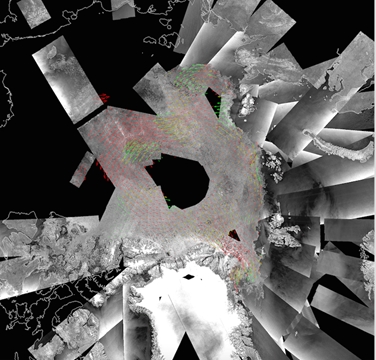 Since the end of June, during a Sentinel-1A unavailability period and for validation purposes, the Copernicus Marine Environment Monitoring Service (CMEMS) has been using Sentinel-1B data for monitoring sea ice and icebergs. Although not yet calibrated, resulting products were exploited by the service, already demonstrating the added value of this second satellite.

"The Sentinel-1B data, which we used during the Sentinel-1B commissioning phase, showed a similar high quality for ice-drift computation as data acquired by Sentinel-1A, " explained Leif Toudal Pedersen, from the Danish Meteorological Institute and part of CMEMS. "The few small deviations, observed in ice drift details detected by the two satellites, could be ascribed to differences in acquisition times ."

On 24 September 2016, Sentinel-1B was tasked to perform observations over the major floods that occurred in South Eastern part of Australia, responding to the activation from the Copernicus Emergency Management Service. Flood delineation maps, based on Sentinel-1B imagery, were subsequently generated by the service. 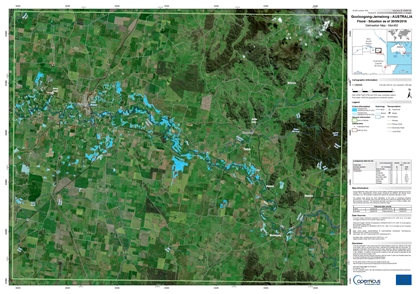 With the beginning of the routine operations of the Sentinel-1 constellation, the revisiting capability of the mission doubled. This will help emergency response teams in even less time, in particular with respect to activations from the Copernicus Emergency Management Service and from the International Charter for Space and Major Disasters.

The flow of data generated by the Sentinel-1 satellites will continue to be planned, acquired, processed, quality-controlled, distributed and archived by the Payload Data Ground Segment (PDGS), managed by ESA–ESRIN, in Frascati, Italy.

The Sentinel-1 Ground Segment operations have smoothly integrated the Sentinel-1B unit, with the first images successfully generated immediately after the first SAR acquisition, only three days after launch. Since then, the constellation operations are systematically generating Level-0, Level-1 (GRD & SLC) and Level-2 OCN products for all data acquired by Sentinel-1 satellites, corresponding to about 8 TB of data daily since June, far beyond the original target.

Access to the Sentinel-1B data in addition to the Sentinel-1A is open to users worldwide since 26 September, following the IOCR. "The performance of the constellation operations is an achievement for the many people at ESA and Industry, committed daily to ensure successful Sentinel-1 activities from planning to data availability" said Betlem Rosich, Project Manager and Operations Manager of the Sentinel-1 PDGS. "The amount of Sentinel-1 data available to users will further increase, once the mission reaches its full operations capacity in 2017, with the use of additional system resources, in particular the European Data Relay Satellite system and a fourth core ground station being set up in Inuvik, Canada."

Thanks to the experience gained over the past two years from Sentinel-1A operations, the Sentinel-1B SAR instrument commissioning activities went very well and were completed three months after reaching the nominal orbit. "At the beginning of the Sentinel-1B operations, the level of achieved data quality goes well beyond the quality reached on Sentinel-1A at the same time. It is currently equivalent to the quality of Sentinel-1A data, allowing to combine seamlessly data from the two satellites for the various applications relying on radiometry, polarimetry or interferometry", says Nuno Miranda, Sentinel-1 Data Quality Manager.

The satellite will continue to be monitored, operated and controlled from ESA's Space Operations Centre in Darmstadt, Germany.

The start of the Sentinel-1B operations is expected to have an immediate impact for many application domains and scientific research activities. With the Sentinel-1 constellation now in place, the overall mission observation capacity is largely increased.

"A full mapping of Europe and its coastal waters at least every six days, in both ascending and descending orbital passes (meaning three days on average), will be very beneficial for many operational and scientific applications," explains ESA's Sentinel-1 Mission Manager, Pierre Potin. "The Copernicus Marine Service, dealing with sea-ice and iceberg monitoring will also largely benefit from the increased observations provided by the constellation. While outside Europe and polar areas, the initial objective is to perform at least one coverage of global landmasses every 12 days; the start of the constellation planning operations shows that we are already very close in reaching this first goal."