Sentinel-1A's SAR radar instrument has been used to monitor extensive flooding along the Dalton Highway in the state of Alaska, U.S.A.

On 18 May 2015, a 128 km stretch of this highway was closed due to flooding from the Sagavanirktok River, which had overflowed and left the highway impassable. The flooding was the result of an unusual combination of heavy summer rains last year and freezing conditions that followed in the winter, which contained the excess rainwater and trapped it underneath layers of ice. This spring saw record temperatures in the region and caused rapid warming beginning in March, which melted the snow and ice and raised the water level of the shallow river to the point where it spilled out over the surrounding area.

A state disaster was declared by Alaska's governor in April due to the impact of the flood on the highway, which is 666 km long, and ends near the Arctic coast at the Prudhoe Bay oil field. The oil field is an important source for the United States' oil, and the closures cut off the only access by road to the field. 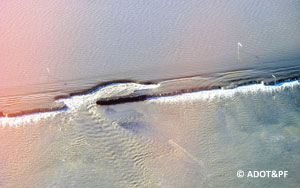 Dalton Highway is one of the most isolated and dangerous in the United States, due to its location and mostly gravel surface. Crews have been working on the highway since March to try to channel the overflowing water away and re-open the road, but after three months of flooding parts of the highway have suffered damage and erosion which has severed sections of the route. The water levels along the river receded to the point that repair work on the highway could begin on 24 May, but it remains closed in the meantime and the highway itself is still experiencing large areas of flooding.

In this Sentinel-1 SAR image, acquired on 23 May in Extra Wide Swath mode (medium resolution product GRDM), the Dalton Highway is highlighted in red and the dark areas nearby indicate flooding. Radar data is a useful tool in flood monitoring, as it is unaffected by local weather conditions and clouds, and clearly shows differences between land and water.

SAR data acquired over the area by Sentinel-1 is continuing to be provided to authorities in Alaska for use in their damage assessment efforts, to help gain an overview of the situation which is difficult to obtain from ground-based surveys of the remote region. 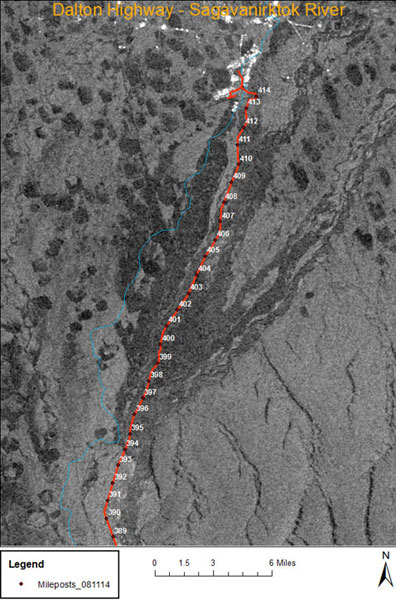