Sentinels on call for the CEMS

Between May and September this year, the Copernicus Emergency Management Service was activated more than ever, with many users needing its rapid mapping products to help respond to a range of environmental disasters.

This summer seems to have been blighted by array of calamities, from forest fires, floods and cyclones to earthquakes.

EMS consists of a Mapping Service, which has been operational since April 2012, and an Early Warning System.

It provides those involved in managing natural disasters, manmade emergency situations and humanitarian crises with timely and accurate geospatial information derived from satellite remote-sensing and completed by in situ and open data sources.

The service, which is free of charge, can only be activated by authorised users in two modes (rush or non-rush).

In May, monsoon rains caused severe flooding and mudslides in western and southern Sri Lanka, making it the worst torrential rain the country had seen since 2003

Delineation maps were produced based on Sentinel-1 data helping those involved in relief projects.

The Mediterranean was struck by numerous wildfires throughout the summer, calling the Sentinel-2 satellites to action. 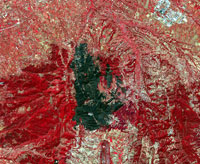 On 11 September, a forest fire started in western Achaia, Greece, close to the villages of Sandomeri, Polilopho and Arla. The fire continued for several days, affecting over 1000 hectares.

A state of emergency was declared, while the villages of Ano and Kato Kastritsi and Platani were evacuated according to an order by the Greek fire department.

The Copernicus EMS was triggered by the Greek General Secretariat of Civil Protection to produce maps showing the fire extent.

The first delineation map was produced based on Copernicus Sentinel-2 imagery acquired on 16 September.

Last but not least, the Copernicus EMS was activated in September for the Harvey, Irma and Maria hurricanes that struck the Caribbean region, including US Virgin Islands, Puerto Rico and the Dominican Republic. 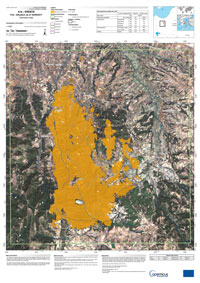 Maria was the sixth hurricane to have formed in the Atlantic basin this past summer season. It reached the island of Dominica and St Croix in the US Virgin Islands as a category 5 hurricane, hitting Puerto Rico after being downgraded to category 4.

Dr Annett Wania, Project Officer at JRC, says, "The Copernicus Emergency Management Service greatly benefits from the high resolution Copernicus Sentinel-1 and -2 satellites. Not only because they increase the response to emergencies like floods and fires, but also because their continuous and systematic acquisitions allow monitoring events that evolve slowly and may lead to a disaster, such as ground deformation after mining activities. In this way, the Sentinels contribute to the entire disaster management cycle - the preparedness, emergency response and recovery phases."