On 17 July and 21 September 2016, two unprecedented giant ice avalanches of 70 or 80 million m3, respectively, rushed down from two adjacent glaciers in Tibet with speeds of up to 300 km/h, over slopes as low as a few degrees.

Data from the European Union's Copernicus Sentinel-1 and Sentinel-2 satellites were key to mapping the events, warning local authorities before the second avalanche struck.

But what have we learned about the events and how does the area look today?

Based on a large number of Sentinel and other satellite data, numerical models and field investigation researchers have found what caused the glacier collapses: a combination of climate change impacts (increase in glacier volumes over recent years; increased water input from rain and snow/ice melt), a slow surge-like glacier instability and frozen margins of the two glaciers preventing them to release the additional volume and instability in a steady way, as normally happens during typical glacier surges.

A key role was played by soft and fine-grained sediments (clay, silt), which the glaciers rested on causing landslide-like processes underneath them, which eventually led to the collapses.

Researchers predicted that the majority of the huge avalanche deposits, up to 80 m thick, could melt away within 2-3 years. In fact, as of April 2018, the avalanche ice has already disappeared from large parts of the northern 17 July collapse and also significant parts of the southern 21 September deposits.

The areas where the ice has melted away, and certainly also some parts of today's ice remains, are covered by the bright fine sediments the glaciers rested on and took with them during the collapse, as shown by the featured images. 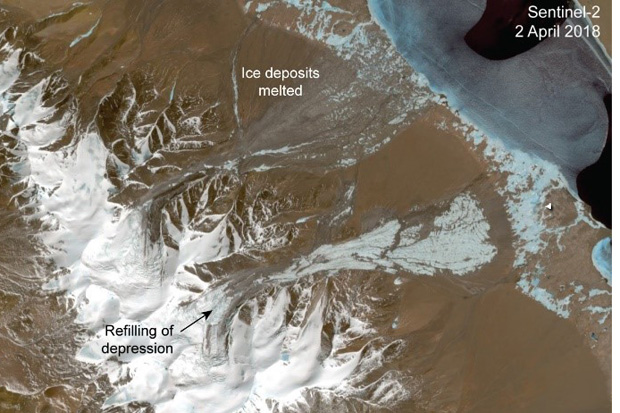 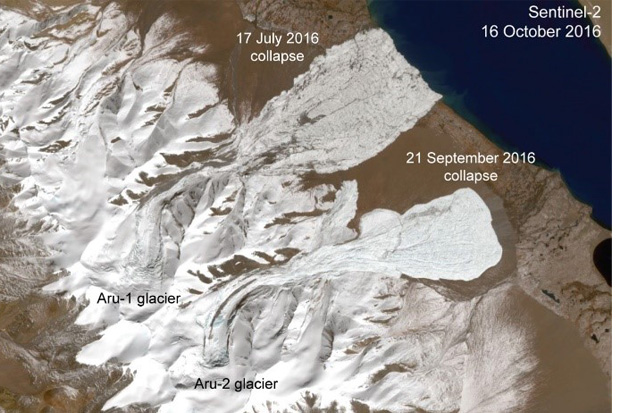 Also, today's Sentinel-1 radar images look very different compared to those of a year ago. In 2016/2017, after the collapses, the avalanche deposits appear bright in the radar images, likely due to high surface-roughness and volume scattering from within the ice debris. Today, the avalanche remains are almost indiscernible from their unaffected surroundings. 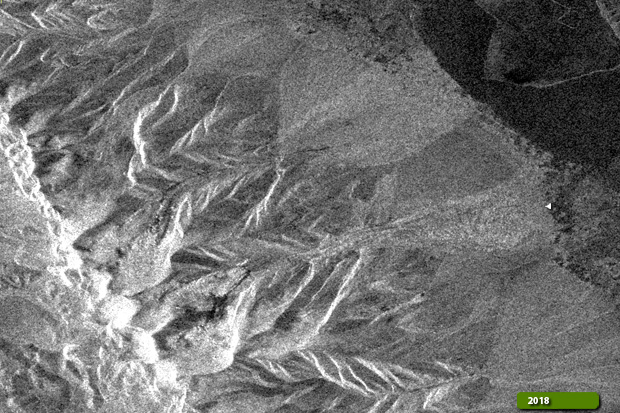 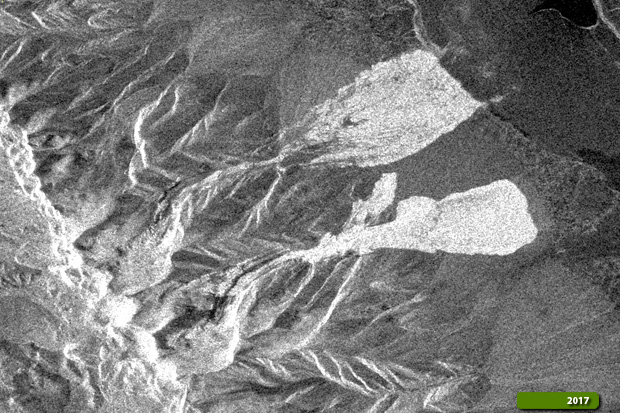 The Copernicus Sentinel images show also how the glacier depressions left behind by the detachments slowly begin to fill again from the surrounding remained glacier sections, in particular regarding the southern glacier.

"The frequent acquisitions by Sentinel-2 provide cloud-free data even over this region that often has cloud cover, and thus helped much to closely monitor the glaciers and their avalanches" says Andreas Kääb, from the University of Oslo, and part of the team that investigated the glacier collapses.