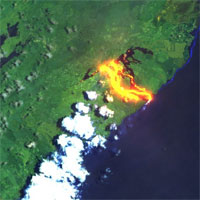 Hawaii's Kīlauea volcano has erupted again, causing an extensive explosion of sulphur dioxide and ash that could pose a risk to people's health and to aviation.

On 4 May, Hawaii's Kīlauea volcano first erupted, causing thousands to leave their homes on Big Island.

On 17 May Kīlauea erupted again, creating a six-mile high plume of ash and gases into the atmosphere, with experts warning the eruptions could continue for weeks and it is not yet known when it will stop.

The Sentinel-1 and -2 satellites from the European Union's Copernicus Programme captured various images before and after the first eruption, indicating that the magma was moving eastward along the volcano's East Rift Zone.

The Copernicus Sentinel-5P satellite detected the sulphur dioxide (SO2) emissions and lava (hot spots) from Kilauea.

Sentinel-5 Precursor – also known as Sentinel-5P – is the first Copernicus mission dedicated to monitoring our atmosphere. The satellite carries the state-of-the-art TROPOMI instrument to map a multitude of trace gases such as nitrogen dioxide, ozone, formaldehyde, sulphur dioxide, methane, carbon monoxide and aerosols – all of which affect the air we breathe and therefore our health, and our climate.

SO2 is a natural trace gas in Earth's atmosphere. The largest source for SO2 in the atmosphere is the burning of fossil fuels by power plants and other industrial facilities. Volcanic degassing events and eruptions also inject SO2 into the atmosphere, ranging from the lower troposphere (passive degassing) up to the stratosphere (explosive eruptions).

SO2 emissions from volcanic eruptions can be a major natural hazard not only to the local environment and populations living near active volcanoes, but also to aviation. SO2 causes respiratory disease (e.g. when entering the aircraft cabin) as well as sulphidation of aircraft engines. Furthermore, SO2 can be a proxy for volcanic ash emissions, which can have a severe effect on aircraft. As such, the timely provision of SO2 measurements in case of volcanic eruptions is extremely important.

The unprecedented spatial resolution of 3.5 x 7 km2 of the TROPOMI instrument aboard Copernicus Sentinel-5P makes it possible to detect these emissions like never before.

For any volcanic eruption, similar to the Kīlauea volcano, Sentinel-5P, with a swath width of 2600 km, its daily global coverage and high spatial resolution, will be a huge asset for supporting aviation control services, such as the Support to Aviation Control Service (SACS) hosted by the Royal Belgian Institute for Space Aeronomy (BIRA-IASB).

In addition, Sentinel-5P will deliver near real-time data of SO2 and volcanic ash in support of the Volcanic Ash Advisory Centres (VAAC), such as the ones established in Toulouse and London.

Sentinel-5P products will be released to the public end of June 2018.