With its unique sensor and frequent revisit cycle, the Copernicus Sentinel-3A satellite can measure sea level in locations where not previously possible.

The mission is based on two identical satellites orbiting in constellation for optimum global coverage and data delivery. For example, with a swath width of 1270 km, the ocean and land colour instrument will provide global coverage every two days.

ESA and EUMETSAT jointly manage the mission, with ESA processing land products and EUMETSAT processing marine products for applications through the Copernicus services. Data are free of charge and open to users worldwide.

The topography package on Sentinel-3 includes a dual-frequency (Ku- and C-band) Synthetic Aperture Radar Altimeter (SRAL), which is based on heritage from the CryoSat and Jason missions. It provides measurements at a resolution of approximately 300 m in the along-track direction after SAR processing and will be the first satellite altimeter to provide 100% coverage over the entire surface of Earth in SAR mode. 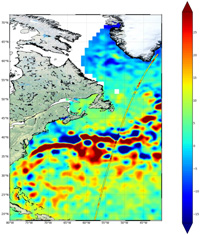 The Copernicus Marine Environment Monitoring Service (CMEMS) is using raw Sentinel-3A sea-level data to produce intercalibrated and mapped sea-level products, which are then used to improve ocean forecasts. Such data are also used by scientists for long-term ocean and climate studies.

Since 19 April this year, Sentinel-3A sea-level data are being delivered through CMEMS. Sentinel-3A, complementing other satellites (Jason-2, Jason-3, SARAL/AltiKa, CryoSat), contributes to building daily merged and gridded sea-level observation products at the sea surface, within the CMEMS portfolio.

Sentinel-3A will reach its full potential for sea-level products in the near future, thanks to upcoming research and development activities within CMEMS. The objective is to achieve higher resolution sea-level products closer to coasts.

The CMEMS Sea Level Thematic Assembly Centre system, DUACS (Data Unification and Altimeter Combination System) processes all satellite sea-level data, to provide consistent and homogeneous sea-level products, both in near real-time and in the past.

Marie-Isabelle Pujol, of the Copernicus DUACS, says, "Thanks to Sentinel-3A we now have access to sea-level measurements in locations of the globe that were previously poorly sampled or not covered at all: The Arctic Ocean sea level is now much better sampled."