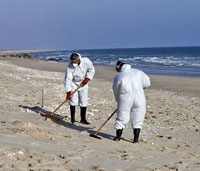 Oil spills, such as those from the Erika (1999) and the Prestige (2002) tankers, result in huge environmental and economic damage to our coastlines.

The European Maritime Safety Agency (EMSA), based in Lisbon, provides technical assistance and support to the European Commission and Member States, amongst others, in the development and implementation of EU maritime legislation. Its mission is to ensure a high, uniform and effective level of maritime safety, maritime security, prevention of and response to pollution from ships, as well as response to marine pollution caused by oil and gas installations.

Satellites, with their sophisticated sensors, provide routine, cost-effective, wide-area surveillance over maritime zones. Furthermore, they can be pointed to a targeted location for monitoring specific operations and gather material in response to intelligence information.

Earth observation contributes to maritime surveillance to help manage the actions and events that can have an impact on maritime safety and security, including marine pollution, accident and disaster response, search and rescue, as well as fisheries control.

Data from satellites are downlinked to a network of ground stations, processed into images, and analysed. The images and results are then sent to the Earth Observation Data Centre at EMSA for data fusion and distribution to end users. 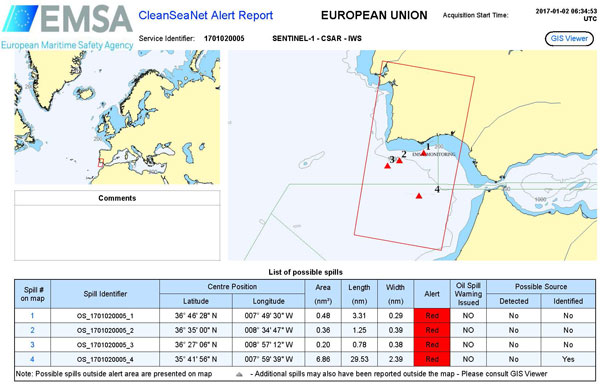 SAR satellite images cannot provide information on the nature of a spill (for instance whether it is mineral oil, fish or vegetable oil, or other), but spills from vessels often appear as long, linear dark lines (indicating a substance discharging as the vessel is moving), with a bright spot (the vessel) at the tip. Vessel detection is also available through the CleanSeaNet service. If a vessel is detected in a satellite image, its identity can often be determined by correlating the satellite data with vessel positioning reports from the European monitoring systems operated at EMSA, such as SafeSeaNet.

When a spill is detected, a pollution alert is sent to national authorities. The alerts are available within 30 minutes of the satellite acquiring the image.

The national authority then chooses how to react to the alert. A patrol aircraft or vessel may be sent to monitor the area and check the oil spill detection, or an inspection of the vessel may be requested in the next port of call.

But where does Europe's Copernicus Sentinel-1 satellite come in?

The satellite carries an advanced radar instrument to provide an all-weather, day-and-night supply of imagery of Earth's surface.

The C-band SAR builds on ESA's and Canada's heritage systems on ERS-1, ERS-2, Envisat and RADARSAT.

As a constellation of two satellites orbiting 180° apart, the mission images Earth with a high coverage frequency. As well as transmitting data to a number of ground stations in Europe, Sentinel-1 also carries a laser to transmit data through the geostationary European Data Relay System. This offers fast data access to support, among others, operational maritime surveillance activities in remote areas. EMSA services are set to benefit from this additional capability.

The spatial resolution of Sentinel-1 also allows the detection of much smaller spills than could be provided by earlier radar satellites. 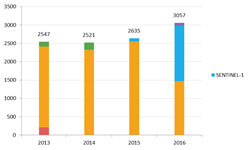 In 2016, the proportion of image acquisitions by Sentinel-1 for the service (1506 out of 3057 acquisitions) was considerable, and this is expected to grow even further in 2017.

On 2 January 2017, the CleanSeaNet service detected spills in Portugal's Algarve Ria Formosa area thanks to the Sentinel-1 satellite. The satellite image displayed four small spills. The spill closest to the shore, just 2.24 km from land, covered an area of 1.64 sq km.

As soon as the Portuguese National Maritime Authority received the CleanSeaNet alert, the drift of the spills were calculated and a pollution alert was sent to relevant national authorities. Correlation of vessel detections with other vessel position information presented a close match, providing authorities with valuable information about the potential polluter. 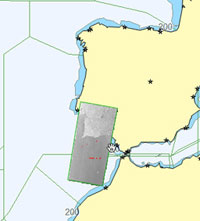 The National Environmental Agency (APA) was contacted and when the pollutants washed up on the shores, samples were collected for analysis. Palm oil was identified and preparations for cleaning of beaches with volunteers and local maritime authorities started.

By 10 January, the cleaning was complete and an APA report confirmed that the substance was palm oil.

Leendert Bal, Head of Operations at EMSA, confirmed that: "The addition of Sentinel-1A and -1B improves significantly the availability of satellite imagery for the CleanSeaNet service. Sentinel-1 offers good quality imagery, which is very much appreciated by our users."