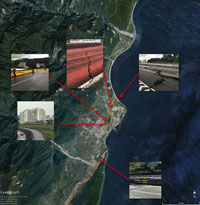 The Sentinel-1 satellites of Europe's Copernicus Programme are being used to quantify the surface deformation of the disaster area around the Hualien earthquake.

On 6 February 2018, an earthquake of magnitude 6.0 on the Richter magnitude scale hit Taiwan. The epicentre was on the coastline near Hualien, which was the most severely affected area, with a maximum shaking intensity of 7.

The earthquake formed the largest of a sequence of events that affected the area over a period of days, with 11 foreshocks of magnitude 4.6 and greater, starting on 3 February. The 6 February earthquake was a result of oblique-slip faulting.

The Centre for Space and Remote Sensing Research (CSRSR) in Taiwan accessed Sentinel-1 data after the earthquake struck. Researchers there have been downloading Sentinel-1A data from data hubs since 2014, for multidisciplinary research and application. The additional acquisitions obtained largely inspired local researchers, such as Dr Jiun-Yee Yen, and colleagues Chih-Heng Lu and Chun-Ching Wang at the Eastern Taiwan Earthquake Center (ETEC), who processed the Sentinel-1A and -B data, producing deformation maps.

The information was immediately used to assess the damage and they discovered that surface deformation extended beyond the Milun fault, all the way south to the coastal mountain range of Taiwan. This detail was not clear until differential interferometry (DInSAR) information was available, which proved extremely helpful.

A SAR signal contains amplitude and phase information. Amplitude is the strength of the radar response and phase is the fraction of one complete sine wave cycle (a single SAR wavelength). The phase of the SAR image is determined primarily by the distance between the satellite antenna and the ground targets.

By combining the phase of these two images after coregistration, an interferogram can be generated where phase is highly correlated to the terrain topography and deformation patterns can be mapped. If the phase shift related to topography is removed from the interferograms, the difference between the resulting products will show surface deformation patterns occurred between the two acquisition dates. This methodology is called DInSAR.

Dr Jiun-Yee Yen, Deputy Director of ETEC, stated, "Without the new satellite acquisition initiated by ESA after this earthquake, it would have been difficult to locate some of the damage, and near impossible to understand the underlying mechanism of this fault rupture."

Radar satellites can detect movements of millimetres in the ground and across wide areas, providing a detailed picture of land deformation and the locations of fault lines. The C-band synthetic aperture radar on Sentinel-1 can provide images with a resolution of 10 m and within hours of acquisition, to aid emergency response.

Chung-Pai Chang, Director of Service, Sciences and Technologies at the Bureau de Representation of Taipei in France, comments, "My colleagues at CSRSR and ETEC in Taiwan requested further Sentinel-1B acquisitions from ESA, and we are very grateful for these additional acquisitions obtained shortly after the earthquake, which proved to be extremely useful."

With its 250 km-wide swatch over land surfaces, the Copernicus Sentinel-1 satellites give scientists a broad view of displacements, allowing them to examine such ground displacements caused by earthquakes, further developing scientific knowledge of them.