Active for decades, Kīlauea volcano - on Hawaii's Big Island - erupted on 4 May. The island also experienced a magnitude 6.9 earthquake on the same day, forcing thousands to leave their homes.

On 30 April 2018, the floor of Puʻu ʻŌʻō crater, at Kīlauea Volcano, collapsed as magma drained from beneath the long-lived eruptive vent. Seismicity and ground deformation indicate that the magma moved eastward along the volcano's East Rift Zone and that is continuing to move into and erupt in the lower East Rift Zone.

Observations from the Sentinel satellites of the European Union's Copernicus Programme were used to monitor this event. Additional acquisitions from Sentinel-1 were planned, in particular to allow performing interferometry at shorter time intervals, using both Sentinel-1A and Sentinel-1B satellites.

The International Charter Space and Major Disasters was activated on 7 May by the US Geological Survey (USGS) on behalf of USGS Hawaii Volcano Observatory.

USGS produced an interferogram (a map of surface deformation) based on overpasses of the Sentinel-1A satellite spanning 7 to 13 May (local time). The coloured fringes indicate displacement of the ground surface. The pattern of fringes near the summit of the volcano indicate withdrawal of magma from the subsurface to feed the eruption, which is occurring about 40 km away along the volcano's lower East Rift Zone. Fringes in that part of the volcano are hard to discern owing to the heavy vegetation, but are apparent, indicating deformation due to rise of magma up to the surface in that area.

The interferograms provided by Sentinel-1 are a good complement for ground-based instruments, and together can be used to assess the volume of magma that is moving within the volcano.

Radar satellites such as Copernicus Sentinel-1 can detect movements of millimetres in the ground and across wide areas, providing a detailed picture of land deformation and the locations of fault lines.

The C-band synthetic aperture radar on Sentinel-1 can provide images with a resolution of 10 m and within hours of acquisition, to aid emergency response. 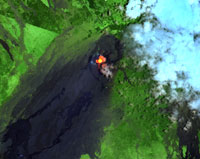 On 23 April, Copernicus Sentinel-2 had also acquired an image over the volcano, which showed how the crater was already quite hot.

Michael Poland, geophysicist at USGS, says, "Sentinel-1 data have proven invaluable for tracking the highly dynamic current volcanic and earthquake activity at Kīlauea Volcano in Hawaii. That the data are accessible very soon after acquisition and cover the entire island have allowed for rapidly available and synoptic views of surface deformation that might not otherwise be available."

Time series of Copernicus Sentinel-2 images over the next days will allow for monitoring of the event and damage assessment.