Copernicus Sentinel-3 soon to be in tandem

The Sentinel-3B satellite scheduled for launch this spring, will be flying 30 seconds apart from its twin, Sentinel-3A, during the commissioning phase. This temporary tandem arrangement is to obtain better cross-calibration between instruments, thus reducing uncertainties in the multi-satellite time series and ensuring an overall high data quality.

The Copernicus Sentinel-3A satellite has been delivering data since its launch in early 2016. Its measurements have shown an excellent quality from the start, confirming its high degree of usefulness for the mission's current applications as well as potential future ones.

Two satellites in orbit at the same time will provide the required global coverage and revisit times to users, with further satellites providing a long time series. For example, the Ocean and Land Colour Instrument (OLCI) will then provide global coverage every two days instead of four using only Sentinel-3A.

Sentinel-3 measures the temperature, colour and height of the sea surface as well as the thickness of sea ice. These measurements are used, for example, to monitor changes in sea level, marine pollution and biological productivity. 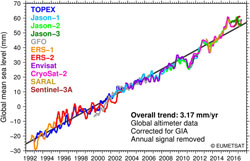 The Global Climate Observing System (GCOS) Climate Monitoring Principles recognise the need to fully understand differences between satellite missions and requested a change to the original plan by introducing an initial tandem overlap phase between new and already-orbiting satellite instruments, to maintain the homogeneity and consistency of time-series observations.

The Copernicus Services and ESA's Climate Change Initiative fully support this approach and ESA, together with EUMETSAT, is taking steps to ensure that Sentinel-3 is compliant. Ultimately, the introduction of the tandem phase will allow climate scientists to quantify and understand the small differences between each satellite, as these influence our ability to determine accurate climate trends.

During the tandem phase, the two Sentinel-3 satellites will fly just 223 km apart along the same ground track for around four months. The tandem configuration is designed to understand any subtle differences between the instruments on the two satellites, as measurements of Earth's surface should be identical given the short time interval (just 30 seconds) between acquisitions, meaning that the uncertainty associated with atmospheric and oceanic variability is minimised.

In addition, since a considerable amount of effort has already been invested in the validation of Sentinel-3A, the tandem will generate a unique dataset that allows the B-unit to be rapidly assessed in terms of performance.

This approach will provide benefits for all Copernicus service applications, be it climate focussed or near-real time services.

Once launched, Sentinel-3B will drift into a position where it will fly in front of Sentinel-3A by 30 seconds. It will remain in this position for four to five months and will then drift into its nominal position.

In addition to the introduction of the tandem phase, another important change for Sentinel-3B compared to the originally-planned configuration will be the optimisation of the orbit phasing between Sentinel-3A and -B to 140 degrees instead of 180. This separation will help to measure ocean features such as eddies as accurately as possible.

The change was initiated by the Copernicus Marine Environment Monitoring Service (CMEMS), who asked to optimise the orbit phase shift to improve interleave between Sentinel-3A and -3B SRAL (Synthetic Aperture Radar Altimeter) tracks for improved mesoscale sampling at 4-7 days.

This phasing change had to fulfil two conditions: minimal impact on the revisit time for the optical instruments and a regular cross over the transponder on Crete for calibration of the altimeter.

The Sentinel-3 Mission Manager, Susanne Mecklenburg, says, "These two changes to the operations of Sentinel-3B directly respond to requests from the user community and will greatly enhance the data content and quality for a variety of applications."

Sentinel-3B has spent the last year at Thales Alenia Space's premises in Cannes, France, being assembled and tested, and now it is fit and ready for its journey to the Plesetsk launch site in northern Russia.