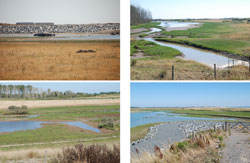 Intertidal habitats can change rapidly, not just in spatial extent but also in vegetation type and cover. Newly created coastal managed realignment sites are a prime example where channels migrate and the vegetation changes from terrestrial to mud flats and saltmarshes.

Monitoring these changes is difficult due to their highly dynamic behaviour, inaccessible nature and risk of ecological damage caused by field work. Aerial photography is costly and thus usually restricted to once a year at best—however, Copernicus Sentinel data are changing things.

Until recently, the exploitation of Earth Observation was rather limited due to both coarse spatial resolutions (at 30+ m per pixel) and long revisit frequencies, extending to months or even years, also combined with often unfavourable water levels in coastal locations with large tides.

Now with the Sentinel satellites of the European Union's Copernicus Programme, these systems can potentially be used to observe a site every few days with images that have a spatial resolution down to 10 m.

Led by the Environment Agency UK in partnership with the Royal Society for the Protection of Birds (RSPB), the Medmerry Managed Realignment project is a large-scale coastal flood protection and marine wetland restoration initiative that is currently using Copernicus Sentinel-2 data to create habitat maps.

Conventionally, habitat mapping at Medmerry occurred every two years based on single date aerial photography and produced by manual interpretation of images, supported by field visits. Such maps represented the area as a set of discrete habitat patches with hard boundaries and uniform contents to each patch.

However, many of the transitions between habitats are spatial gradients and ecotones rather than hard boundaries, which are apparent even at the 10 m spatial resolution of Copernicus Sentinel-2 data.

These variations and gradients could be important as early indicators of canopy changes / vegetation stress, which could suggest longer-term (inter-annual to decadal) loss or gain of vegetation.

For 2018, 144 Copernicus Sentinel-2 images were acquired for the site, and of these, 22 images presented cloud-free conditions, whole site coverage, low water levels and preferably a rising tide to allow maximum draining of intertidal surfaces, which were potentially useable.

To produce the habitat map only four dates/images were selected to maximise the spectral differences between habitats caused by their phenological behaviour, the growth and dieback of vegetation through the seasons. 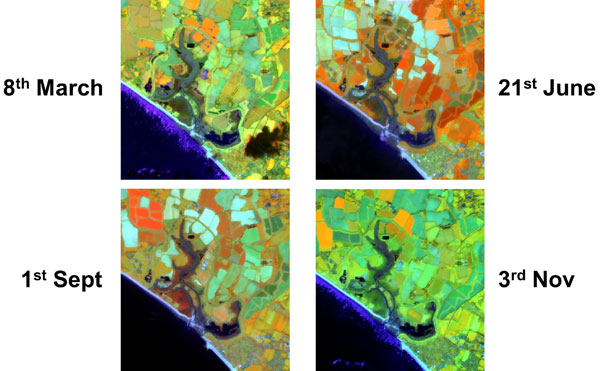 An unsupervised clustering was used to identify 50 spectro-temporal clusters related to the habitats present within the site. From these clusters, 13 habitat classes were mapped, including subdivisions only possible because of the multi-temporal Copernicus Sentinel-2 data, detecting transient subtle spectral features. 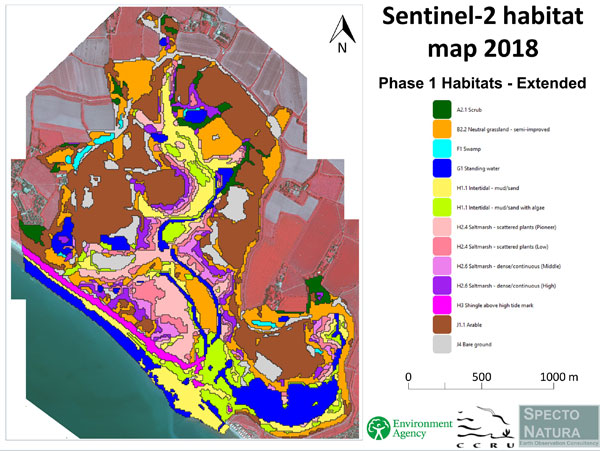 At a conference reporting a wide range of monitoring work at the Medmerry scheme, the RSPB site manager, Tim Callaway, said "The annual Copernicus Sentinel-2 based habitat maps were 'game changing' for their management of the area".

The work featured in this story was undertaken by Specto Natura Ltd., supported by Cambridge Coastal Research Unit, and funded by the UK Environment Agency.