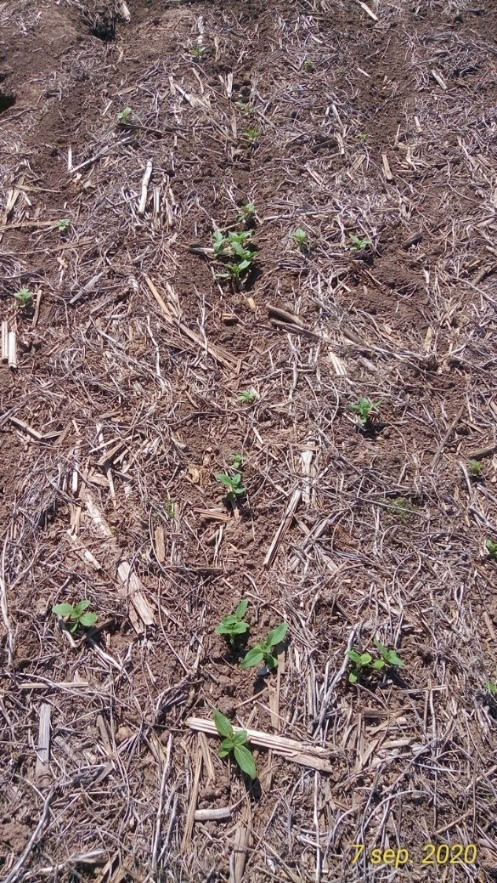 A rainfall deficit in Argentina generated a forecast of a decrease in the production of winter crops as well as forage production this year, affecting the yielding of livestock in its central regions—data from the Copernicus Sentinel-1 mission are helping to create a monitoring system for such croplands.

Knowledge about the crop situation in any country is very important for the entire agricultural sector - farmers, cooperatives and the government. The impact of the occurred drought in rural areas of Argentina is of high importance for the whole country, due to the high contribution of the agricultural sector to the overall gross production.

The Swiss company Cropix calibrated an index using data from the Sentinel-1 mission of the European Union's Copernicus Programme, which can be used as a proxy for the water content of plants and top soil where there is no vegetation.

This index, named SWI (SAR water index), ranges from 0-150. In this study, Cropix used it to evaluate the impact of lack of precipitation for the vegetation. 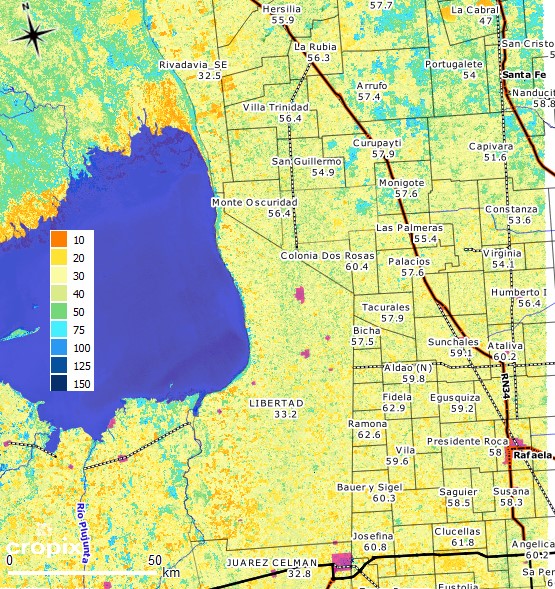 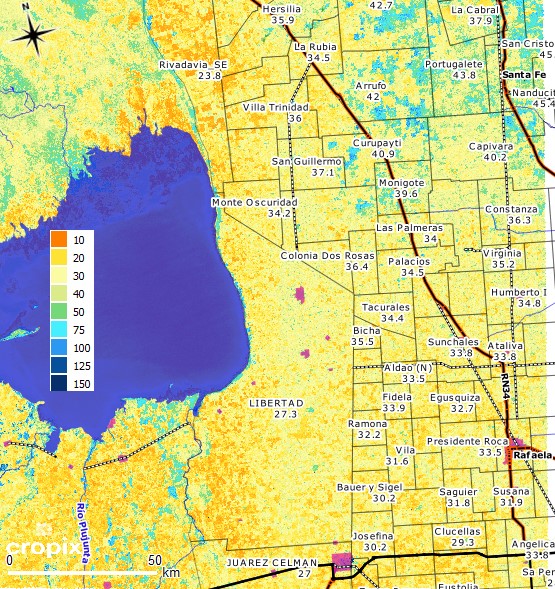 The data were calculated at a district level for the provinces of Santa Fe, Córdoba and Santiago del Estero, from a Copernicus Sentinel-1 tile. 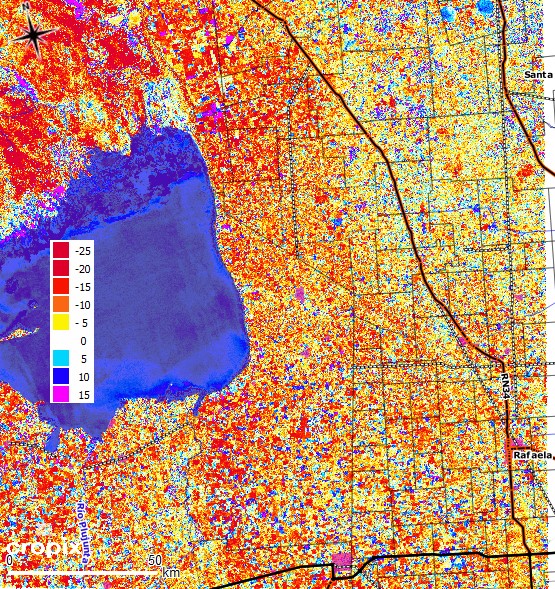 The biggest differences are evident in the districts with the highest sowing of winter crops and forage crops.

The differences between the years are presented in the featured table, and show values that exceed 50% in SWI units in some cases.

It can be noted that districts with more agricultural areas have a higher negative difference: for instance, Colonia Cello, located south of the area has the largest difference, being a district where most of the area is cultivated. On the other hand, Portugalete is located in an area of natural bush and pastures and shows the smallest difference.

In general, it is possible to say that winter crops will yield significantly below last year. Rains that may occur from now on will not modify the amount of harvest significantly.

The use of objective data to evaluate the situation is relevant to estimate the impact on yield. Using the capabilities of SAR for imaging large areas continuously with stable time-series allows to cross check the condition of vegetation over different seasons.

The SWI allows to quantify the difference between a normal year and a dry year. Based on this information, it is possible to forecast a shortfall of production. This can be done for the whole area where meteorological data are only sparsely available.

The use of indices derived from Copernicus Sentinel-1 SAR data, like SWI and ESVI (enhanced SAR vegetation index), constitute the basis of the generation of time-series data to establish a monitoring system for croplands.

Roberto Gagliardi, an affiliate of Cropix from Argentina/Santa Fé, states, "Copernicus Sentinel-1 is ideal to accomplish such schemes, due to three reasons. The first is that the spatial resolution of 20 x 20 m is sufficient where plots have a size of more than 1 ha. Secondly, the temporal resolution of either 6 or 12 days is in most cases sufficient to monitor crop development. Last but not least, the reliability of Copernicus Sentinel-1—one really gets an image according to schedule".

Gagliardi further explains that "The reliability is very important, because the use of any satellite data in a business chain involves more than just data. One needs hardware, software and skills, which are all costly.

"If one cannot rely on the data supply, a backup scheme is needed, which again is costly," concluded Gagliardi.

This article refers to the work conducted by Roberto Gagliardi at Cropix in Argentina, during 2019/2020, and is based on his contribution.