The Copernicus Sentinel-5 Precursor mission is the first Copernicus mission dedicated to monitoring our atmosphere. Copernicus Sentinel-5P is the result of close collaboration between ESA, the European Commission, the Netherlands Space Office, industry, data users and scientists. The mission consists of one satellite carrying the TROPOspheric Monitoring Instrument (TROPOMI) instrument. The TROPOMI instrument was co-funded by ESA and The Netherlands.

The main objective of the Copernicus Sentinel-5P mission is to perform atmospheric measurements with high spatio-temporal resolution, to be used for air quality, ozone & UV radiation, and climate monitoring & forecasting.

The satellite was successfully launched on 13 October 2017 from the Plesetsk cosmodrome in Russia.

The TROPOMI instrument combines the strengths of SCIAMACHY, OMI and state-of-the-art technology to provide observations with performances that cannot be met by the current instruments in space. Performance of current in-orbit instruments are surpassed in terms of sensitivity, spectral resolution, spatial resolution and temporal resolution.

The Copernicus Sentinel-5 Precursor ramp-up phase ended on 5 March 2019 and since this time the mission is in routine operations phase. The public release of the Aerosol Layer Height product took place during September 2019 and the release of the Ozone Profile during November 2021.

Level 1B and Level 2 products are available via the Copernicus Open Access Hub.

Level 1B and Level 2 user documentation is available in the Products and Algorithms Technical Guide.

Key users of the  Copernicus Sentinel-5 Precursor products are Copernicus services such as the ‘Copernicus Atmosphere Monitoring Service'  (CAMS) or the ‘Copernicus Climate Change Service' (C3S). Decision makers will use the information provided by these services in order to take the right actions on environmental policies from which depends the well-being and security of EC citizens and future generations.

To celebrate the five year anniversary of Copernicus Sentinel-5P - with its launch of 13 October 2017 - the following is a special infographic, highlighting important facts and achievements of the mission, after its first five years of operations. 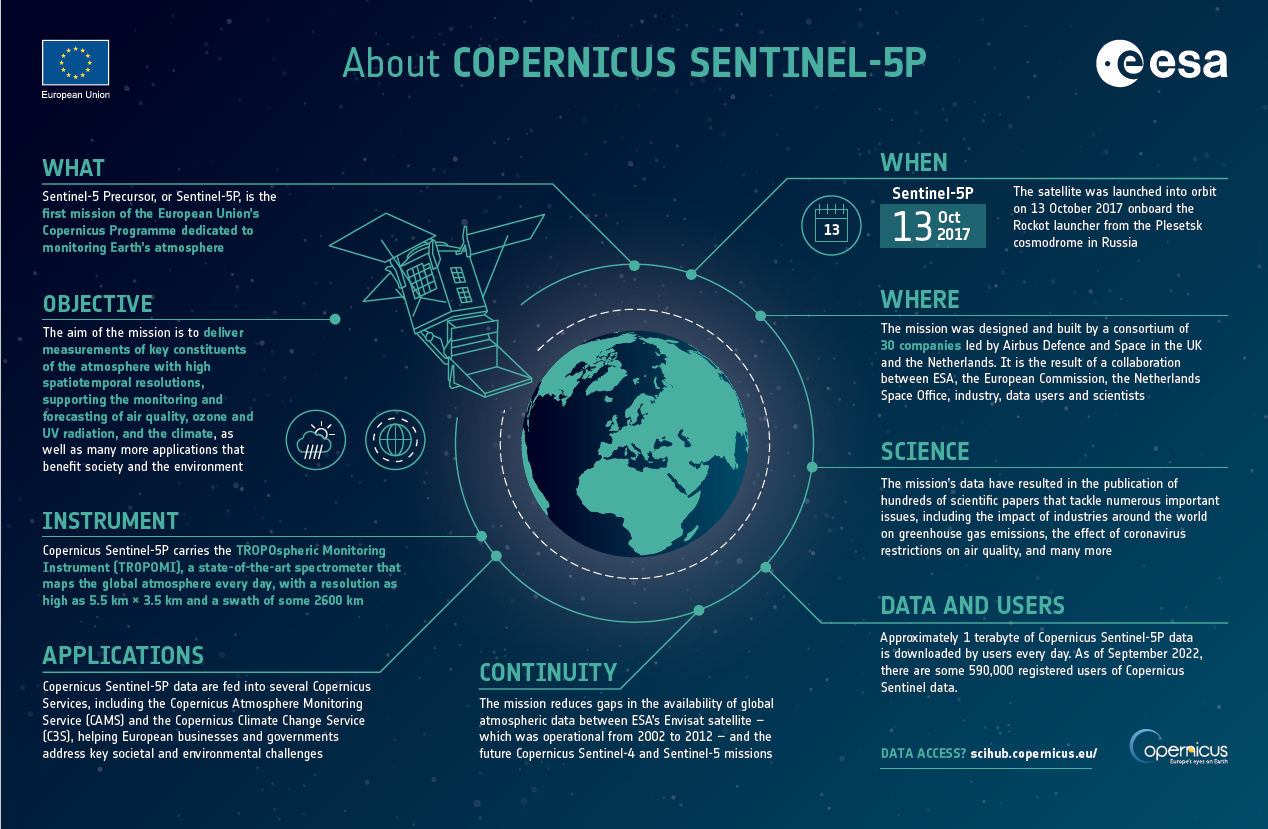